I can't remember feeling more loved than I did on Wednesday afternoon and Thursday.  It began when I e-mailed my first of the month retailer newsletter.  Within an hour or so, I received a barrage of heartfelt comments and messages of love and support from dozens of co-workers, retailers, and clerks.  It's those comments and encouraging words that have kept me going those past few months.

Last week my cousin Sheila sent me an e-mail saying that she had noticed on my Bucket List on my blog that I wanted to paint an impressionistic work of art.  It just so happens that she's a brilliant professional artist who's been painting for over 50 years.  This incredibly generous woman took the day off to drive from Cincinnati to Lauren's apartment in Lexington for a private lesson for Lauren, Jordan, and me.  We all selected our own photos to paint and among many other important lessons were taught about composition, the rule of thirds, the importance of painting the darkest colors first, and holding your brush at the end of the paint brush (not like a pencil).  Apparently, the most common mistake that artists make is to overwork their paintings.   Of the three of us, I was the worst at that (not too surprising).  She kept having to tell me to, "STOP! Leave it alone! Don't mess with it!"  She was so right.
We  reminisced about her wedding to my first cousin David around 1974. In a long bohemian gown with hair past her waist and a wreath of flowers in her hair, I thought she was the most beautiful bride I'd ever seen in my life!  The wedding was outside in a field and there was a long-haired guitarist in the tree playing "Stairway to Heaven".  The groomsmen all wore white overalls. My first cousin David had shoulder length blond hair with John Lennon glasses. I was ten years old and enthralled with the "grooviness" of the moment.   Although I rarely see them these days,  I feel lucky to be related to such a creative and talented couple.
Sheila considers herself a hard, mean teacher, but she must have been extra kind to us knowing that I was going to have my head shaved in a few hours.  We laughed, and learned way more about art than I ever imagined we would in 4 hours!  It was the best time I remember having since Lauren and Jesse's wedding almost a year ago.  Simply perfect! 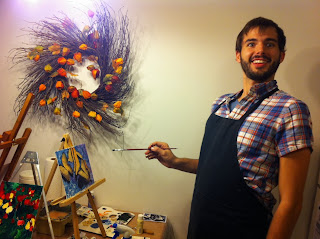 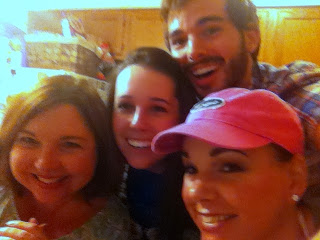 A "selfie" of Sheila (left) and Lauren, Jordan, and me. 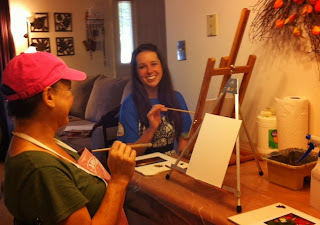 Lauren and me, with blank canvases. We were already having fun!

Lauren's landscape (far left), my impressionistic tulip painting of one of Jeff's photographs (center) and Jordan's painting (far right) of one of his own photographs. We were very proud, seeing as it was our first official lesson.  Sheila was an excellent teacher!

Right after the lesson that afternoon, it was time to head to Liz's for a head shaving party.   Her hairdresser, Morgan, works at Allure and volunteered to drive to Liz's house for a private head shaving.  Liz, of course, made a party of it, and provided a spread of hor d'oeurves and cocktails. Ironically, I was the only one not drinking. I don't want to add more toxins to my already toxic load.  Instead, she found the best fruit/ veggie smoothie at Whole Foods and put it in the a huge martini glass.  We proposed several toasts, and I really enjoyed learning about Morgan and her three year-old daughter. My head felt safe in her hands. 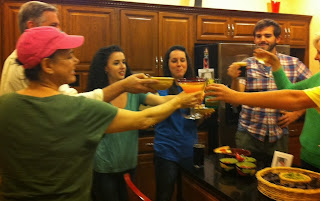 A toast to bald heads, among many other things.

Morgan, Liz, and me.

Last  Wednesday, one week ago, my hair was thick enough to secure with an elastic band without twisting and wrapping it around more than once.  Beginning on Saturday,  I noticed that, in the shower, the hair was coming out in mass quantities. For the next four days, this happened on a daily basis. I'm amazed that I had any hair left by Wednesday.  I was so tired of vacuuming and lint rolling hair from my clothes, bed, floor, and walls!!

After four days of vacuuming and lint rolling hair from the bed and pillows, I decided it was time to shave it off. It was getting really thin on top.   After four days, I had to wrap the elastic band 6 times around my hair to secure a pony tail.  It was time. 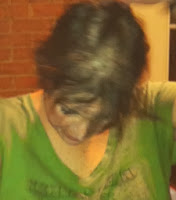 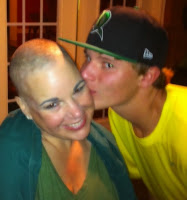 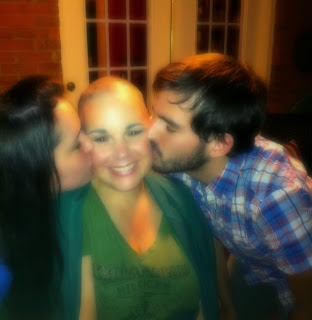 Liz placed a chair on her back deck and everyone crowded around snapping pictures, giving hugs and kisses, and complementing my round head. I always thought I had an Uncle Fester head.  I just need a light bulb to put in my mouth. My head has always been bigger than average. I've always loved trying on hats in department stores. Half the time, the hats just sit on  the crown of my head.  Jeff and I often share reader glasses and his always squeezes my brain. I once measured our heads and mine was a full 1/2 inch bigger. I thought it was my thick hair but, nope, I just have a fat head. 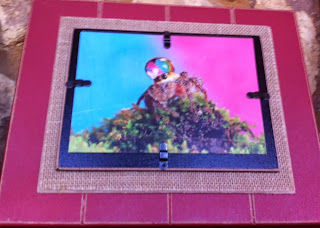 Did you know that  jumping spiders use water droplets as hats?  Lauren had written that on her
dry erase "happy" board in the new guest bedroom and I shared that info with Liz.  She, of course, found a photo of one and framed it for the special occasion.

Then it was time to go upstairs to Liz's bathroom, where all eight of us sat and watched Morgan shave it clean with shaving cream and a razor.  Jeff sat on the toilet snapping photos and everyone else was crowded in and around her Jacuzzi tub watching the show.  She then trimmed and styled my two new wigs and also gave me a lesson in scarf tying. The day was as perfect as it could have been. 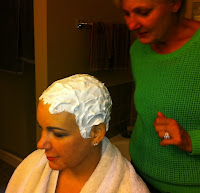 Once my 15 year-old Godson Grant  left the room for a minute, Jeff said, "I never thought I'd say this in public honey, but....great head!"  Our 21 and 26 year old children were mortified, while the rest of us laughed.  Jeff has a way of easing tension in a room, especially when it's mine.

I'm surprisingly ok right now.  I do feel a bit liberated.  The next morning, I took a shower and knocked about an hour off of my morning grooming time (hair washing, conditioning, leg shaving, blow drying, flat ironing, hot rolling....)  That doesn't even count the eyebrow plucking and waxing. You see, my mom's side of the family are German Jews and my dad comes from Cherokee Native Americans. I get it honestly.

The next day, I began chemo round 2.  It was a lighter crowd this time:Jeff, Liz, Lauren, and my cousin Angel whom I haven't seen in years.  It was so nice to catch up with her. 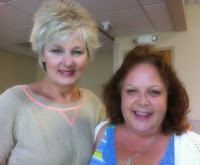 Liz and my cousin Angel

The four hours seemed to fly by this time, and I was grateful for the love and and to close my eyes for a few minutes or so.   I had slept a grand total of one hour the night before (steroids!), and was pretty exhausted.  Dr. Moss changed my medication slightly so that it will take care of the sleep and other issues:

Restoril (no more Ambien again...EVER!)- 15-30 mg (I took 30 mg and slept 6 hours last night-thank you God!)
Effexor- (increased from 37.5 mg to 75 mg - an anti-depressant and helps with night sweats and hot flashes).  Since June 28, I used to cry my eyes out almost every day. That has subsided in the past week or two and I'm so grateful.
Cipro-an antibiotic replacing the Nuelasta shot (which will help avoid infection). It's not as effective as Nuelasta so I have to be diligent about avoiding the public, infection, and taking my temperature several times a day.  But, I will hopefully avoid a lot of the bone pain and side effects from last month.  I'll know more in the next few days whether that was a good idea.  Unfortunately, Dr. Moss said that my chances are better of contracting mucositis when not taking Neulasta (more on this special malady in a bit).
Iron- I knew this would happen, as I was diagnosed with anemia two years ago. Dr. Moss finally approved this supplement and said that once the menopause kicks in ("Should have already happened," she said, and that my iron count would greatly approve). If it didn't, I would be too weak to walk and have to consider ablasion outpatient surgery, even before my chemo treatment was over.  That's where they burn the lining of the uterus with a laser.  Pain and side effects last only a few days.  Between that and the chemo, I should never have another period again.  Talk about a silver lining to this whole nightmare!
Lortab- for the pain caused by my inflamed breast which happens with every chemo infusion... Whenever you have had any kind of cut, incision, or inflammation, chemo makes it flare up again.  Great.  The purple eggplant honeydew returns again.

Mucositis is a very common side effect of chemotherapy. Apparently, it's one of the worst of them all.   Chemo can often scald your entire entire digestive tract, so it means more than just your mouth. It's your throat, esophagus, your stomach, colon, rectum and anus. (Again, sorry if you're reading this over breakfast). Everything is withered, burning, and intolerable.  Thank God, I haven't experienced this side effect (knock on wood).   Doctors often prescribe something called "Magic Mouthwash" for the mouth sores, but I've read online and received several FB messages  recommending I order some different products online BEFORE it happens.  I plan on doing it because I'm a good girl scout.  I like to be prepared and always believe that by packing an umbrella, it's destined to be a pretty day.  On the other hand, I had the opportunity to buy AFLAC cancer insurance available by my employer (which I DID NOT do!), and well...see how that worked for me.
The chemo often causes several mouth sores to appear concurrently in your mouth and the pain is supposedly excruciating, even when not moving your mouth.   It's like having a mouth full of canker sores and fever blisters on your lips, mouth, tongue and throat.  Seeing as one fever blister has me running to the drug store for tubes of Abreva I apply every fifteen seconds, I can't imagine the torture of having them everywhere in your mouth.   Home health care nurses seem to know a lot about magical remedies that doctors and infusion nurses haven't even heard about since the real battle begins once you leave the infusion center.  Unfortunately, most insurance companies don't cover home health care nurses.  I just happen to read about these treatments online and on my Facebook posts form friends and mutual friends.  (A special thank you to Omar Azam!).  The remedies are supposedly magical.   Of course,  this first one must be ordered out of the country  (Canada or Australia- not sold in the U.S.). It's a dental product called Gelclair, however dentists aren't usually educated about chemo health care.  I also had read that Aloe Vera juice, a coating tonic which soothes much of the stomach issues.   Liz picked up some of that for me at Whole Foods.  There are a few more homeopathic remedies such as Slippery Bark Lozenges (Thayer's Brand). I had also read about Carafate, a syrup which lines your entire stomach and is quite blissful. Since I'm most worried about the mouth sores, I plan on ordering the Gelclair from Canada...just in case, because I was always a good girl scout.  My mom, the girl scout leader, would have surely sewn a new badge on my sash for planning ahead on this occasion.  Neglecting to buy the AFLAC cancer insurance, she might have given me a nice long lecture...in front of the whole troop.