Monday was my follow-up appointment at the oncologist and I was a wreck.  Jeff knew it so he took the day off work to drive me there.  The only medication I’ve been taking is Effexor (an anti-depressant) and I have been weaning myself off of it slowly. I was down to a low dose every other day.  One of the side effects of Effexor happens to be that it cuts back on the number and intensity of hot flashes.  If I didn’t have the knowledge and fear of drugs that I do, I’d be gobbling those happy pills like Cookie Monster.   Within the last month I’ve had more crazy dreams than I care to tell you about in detail. Most of them involved bad news from my upcoming doctor visit:  the cancer has spread, my recent promotion to manager was rescinded, and walking through tulips in Lexington Cemetery shopping for my cemetery plot.  I woke up every morning exhausted from the nightmares.
Jeff and I arrived at Dr. Moss’s office loaded with a stack of resumes to read over and his massive stack of billing for his firm.  The appointment was in the afternoon and we knew we’d be waiting for a while.  After about thirty minutes they took me back to draw my blood and directed me to the exam room.  Thirty minutes later, Dr. Moss walked in.  Her hair looked liked it had grown three or four inches since I last saw her.  I wondered why mine hadn’t.  We talked about my recent diagnosis, which I haven’t had time to even blog about lately.  An MRI revealed that I have a torn rotator cuff and have to have surgery as soon as possible.  The orthopedic surgeon said I have two tears and one is considered to be a full one.  The longer I wait, the worse it will get.
Yep. That 25th wedding anniversary gift is the one that keeps giving.  Of course, I’m referring to my Jacuzzi fall 2 ½ years ago. Dr. Moss asked if I had scheduled my surgery.  Not yet, I said.  I’m so busy that I not only don’t have time for the surgery and recovery, I don’t have the time to pick up the phone and schedule it.
I had gained seven pounds since I started back to work.  Before then, I had been diligent about eating healthy.  Right now, it’s all about what is the quickest and easiest.  Sigh…I know so much better.

I, like many other patients, want a post-treatment scan that will tell us we're cancer free. There is no such test.  Pet scans will only detect tumors that are one cm and bigger. Even if my cancer had returned, it wouldn't be that big yet. The best you can ever hope for is "No evidence of disease."

Dr. Moss talked about Tamoxifen, the estrogen-receptor blocker that will keep estrogen from feeding any breast cancer cells that might be lingering.  She wrote a prescription for it and another for full strength Effexor.  The most recent protocol says BC patients take Tamoxifen for ten years.  “I would take the full strength of Effexor—for the mood swings and the hot flashes.  You will need it.  If you don’t, you’re setting yourself for failure.  You’ll stop taking the Tamoxifen and jeopardize your breast cancer treatment.”

“What are the side effects?”  Although I’d read up on them, I wanted to see what she’d say.  “Double the risk of endometrial cancer, nausea, vomiting, bleeding, cataracts, blood clots, fatigue, depression.....”  There's even more.
She then checked my left breast, which isn’t very pretty.  The purple golf ball I used to have looks as if it has sunken in and disappeared, leaving behind a crater that’s as hard as a rock.  “How long has it looked and felt like this?” (Since not long after I completed radiation). “Well, it could be just scar tissue but I want to make sure.  Let’s schedule an ultrasound as soon as possible.”    I started shaking, but only my insides.  I could feel my heart beating faster and all my insides quivering, but carried out my stack of work to the receptionist desk as if nothing was wrong.  I remember my first visit there.   My nose was red and eyes were swollen from crying.  I was mad as hell that I was there and wasn’t shy about showing it.
Now, with each visit to the oncologist it’s as if I’m appearing in front of a judge.   The first time, I met her with fear, anger, and defensiveness.  After a few appearances in “court”, I’m still a scared victim but try not to let it show.  Now I’m making friends with the bailiffs.

“Did you ever get a new car?” says Amy, the receptionist.  “Not yet.  But we’re looking.”   I’ve been looking for a new (used) car to replace my burnt up Mini Cooper.  “How’s your hair under the wig?  Has it grown much?”  I had to laugh.  “It’s pretty hideous. It’s half black/half white and one big cow lick.”  I’m thinking about getting hair extensions, but that requires a day off.  With spring coming, the wigs are already becoming intolerably hot..  I keep the office so chilly that even the big men who walk in wearing jackets are teeth-chattering cold.
They “worked me in” for an ultrasound three days later.  They were implying urgency while on the phone to the Breast Center.  Of course, this added to my terror.  I cried all the way home.
Three days later, Jeff and I made the two hour drive up Mountain Parkway.  Each time I pass the Stanton exit, I see the black spot that scarred the asphalt on the shoulder of the road where my little Mini Cooper, clothes, cake, and wig burned up in January.
We arrived on time at the Breast Center on Thursday, carrying more work to keep us busy.  They brought me back to a room to undress from the waist up. “We’re going to do another mammogram. You’re due for one in June,” says Kaye, the mammographer.  Whatever.  I’m so tired I just follow her to wherever, strip and have her place my boob and arm (I can’t lift my left one by myself) wherever she wants it.   She places a boob, one at a time on a piece of 12” x 12” plexiglass.  You hear a whir and see another sheet of plexiglass compress the breast like a pancake.  I wince in discomfort.  I look down and am amazed that my dense breast has flattened to fill out all but about one or two inches around the perimeter of the glass.  I imagined Jeff having to have this done to his, well…never mind.  Kaye tells me she was off THREE MONTHS for rotator cuff surgery. Shit.  Really? My orthopedic surgeon said two weeks!

Dr. Marta Kinney is the radiologist who performed my ultrasound afterward.  She’s blond, Polish, attractive, and thin with high pronounced cheekbones like my friend Liz’s.  She was diagnosed with breast cancer four years ago, had a bilateral mastectomy and reconstructive surgery.  How’s that for irony?  A woman who detects breast cancer gets the dreaded diagnosis herself.  Jeff comes back to the room with me.  I’m trying very hard to focus on what she’s saying but she sounds just like the actress on SNL when she impersonates Arianna Huffington.  Focus, Ann, focus!  This is important stuff, I tell myself, but yet I’m thinking….Arianna is Greek.  Why would a Polish woman’s accent sound like hers?  Focus!  I heard her say, “This appeared to be scar tissue. “  Nicole the nurse walks in.  “How beeg vas your tu-more,” asked Dr. Kinney.  “BIG, almost 3 cm,” Nicole interrupts.  I did a double take because I remembered her telling me nine months ago that it was 2 ½ cm which wasn’t quite an inch.  She’s seen much bigger, she said back then.
“Are you on Tamoxifen,” Dr. Kinney asked. I just got the prescription this week. I haven’t started it yet.  She rolled her eyes and said, “Tamoxifen really increases your appetite.  When I was diagnosed, I weighed 103 lbs.  I’m now 132.”   I was finding it difficult to sympathize with her on that one. I haven’t weighed 132 since my junior year in high school.  “Although nothing about this breast is normal, I see no evidence of cancer at this time.”   Hallelujah!  Although I knew “this time” meant regular visits and scares, for today, I was happy with the news.  I have a reprieve from worry for a few months.

Before heading home, Jeff and I stopped by Arkon’s house. Arkon is the name of a middle-eastern mechanic/entrepreneur who likes to “flip” cars that have been wrecked (but not the engine).  We bought Jordan’s Camry from him in December and when he heard about my Mini Cooper mishap, he offered to help me find a good deal elsewhere since he didn’t have any of the models I was looking for at the time.  When Jordan broke the car door handle off during an ice storm, Arkon replaced it for free.
Arkon had the perfect car for me, he said…a 2004 Volvo S40.   It’s a very safe car, but definitely not a mid-life crisis car.   He had just put some new tires on it and it only had 95,000 miles.  I’ll only be driving it to work nine miles a day and to doctor appointments in Lexington.  I really wanted a Fiat but Jeff says they’re unsafe.  Guess it seems silly to take Tamoxifen as a cancer precaution and then buy a dangerous car.  Kind of like eating French fries and washing them down with a high vitamin smoothie. Wait…I sometimes DO that!
I drove home in my Volvo, took a bath and went straight to bed.  I slept through a massive thunderstorm and Buddy’s panting and whines over the aforementioned.  That hasn’t happened in years!
So….today..April 5, 2014…marks the 30th anniversary of the day that I met Jeff.  It was a Thursday and Selectrocution night at 2001 V.I.P, a nightclub in Lexington.  My friend Pam called me up and said, “Tonight we’re going to Selectrocution.  I’m picking you up in 30 minutes.  Be ready.”  I was in my pajamas with a mud mask on my face.  “Pam. I’m in my pajamas..”
“Thirty minutes.  Be ready.”    So I was.
The idea of Selectrocution makes me cringe today. But in 1984, it was state of the art EHarmony.com, only based completely on appearances.  But when you’re 19 with a fake ID, you’re pretty shallow.  When you walk in, they ask your initials and pin a card with two three inch letters to your lapel or dress.  They also give you a card with your initials at the top with five blanks on them.  You write down the initials of five men or women you are attracted to and turn them in at the computer.  At the end of the night, you get a print-out of who picked you (an asterisk beside the initials if they picked you too) and how you rated out of all of the women.  Ugh.  Can you believe that?   I saw Jeff and his friend Calvin walk in and I wrote down their initials in 2 of the 5 blanks.  I told Pam, ”I’m going to walk by those guys.  Tell me if the tall one looks.”  I walk by with my drink in one hand and my pinkie finger on the other twisting as I walked by.  I came back to the table and Pam said, “Not only did he look, he wrote down your initials on his card!”  I was seriously wearing a blue dress that buttoned all the way up the neck.   Jeff later called it my “nun” dress.   Then the D.J. played Super Freak, my favorite dance song at the time.  I asked him to dance, he asked for my phone number, and the rest is history.  The club later became a strip club named Pure Gold, so Jeff tells people, “There’s where I met Ann.”
I’m just praying for another 30 years with my Selectrocution dude! 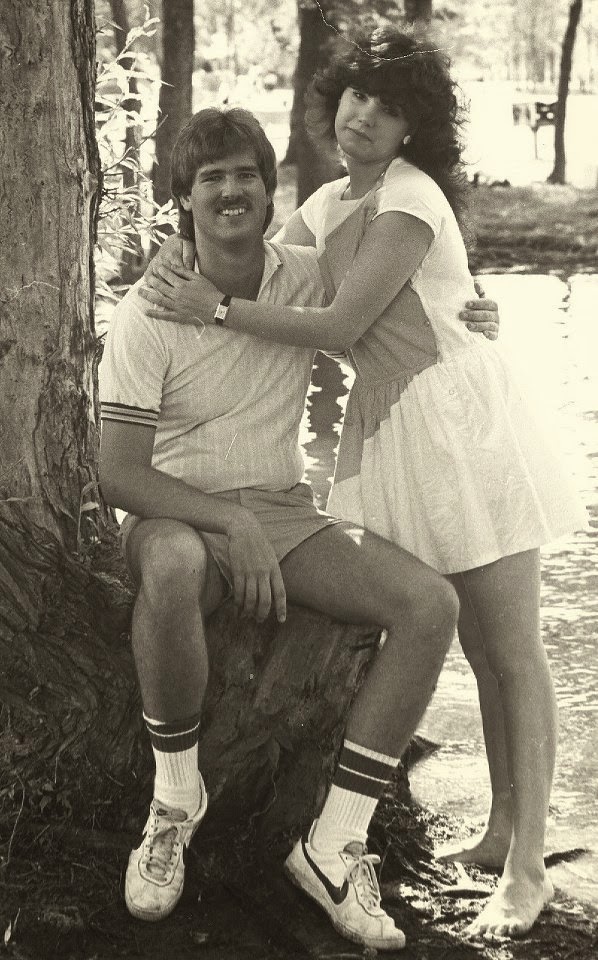