After learning about my cancer diagnosis, one of my co-workers said, "But you're the healthy one!"  I had to laugh. I'm at least 20 lbs. overweight, I don't really exercise (“shopping is my cardio”-guess where I stole that line?), and for decades, I’ve gotten 5-6 hours of sleep a night.   But I do have the best of intentions.  My whole life, well maybe since I was about 11 or 12, I’ve been obsessed with losing weight.  You name the diet or the pill, during my teens, 20’s and 30’s, I’ve tried it.  After all, the FDA has approved it (Ha!).  Oblivious to the side effects at the time, due to vanity- not health-I was obsessed with losing weight.  I’ve gained and lost 25 lbs. dozens of times.  I’m 5’8” and big boned…wait…actually I’m 5’7” since my back surgery in 1999.  People would say, “But you’re tall and big boned. You can carry more weight.”  Maybe so, but I was and still am… 20-25 lbs. heavier than I want to be.   So I spent at least a decade eating low fat garbage. You name it. Wow! Chips, Snackwell cookies, Weight Watcher dinners and snacks….   I’d wash them all down with a Diet Coke thinking I was making the best food choices.  Oh boy.
Then…I’m ashamed to say what happened next.  I bought a book.  A really badly written book by a shady character named Kevin Trudeau.  The book is called Natural Cures They Don’t Want You to Know About.  This purchase was made long before I relied on Amazon for my book reviews.  I had no clue that the man was a sleazy fraud when I bought the book.  He’s a terrible writer, but I was intrigued by the content.  There’s something appealing to me about anyone willing to blow the whistle on a company, the government, FDA, Big Pharma, Monsanto, CAFO’s (Concentrated Feeding Lot Operations), etc. and risk their careers and reputation.  Mr. Trudeau never claimed to be a doctor.  He was a consumer advocate and researcher (and greedy felon).  Whatever the case, I’m grateful he piqued my interest.  It was around 2005 at the time and I had recently turned 40.  My energy level wasn’t the same and I was searching for an answer.  I wanted to feel better and I didn’t want to take any more medicine.  I also needed to get my weight under control.  I was very skeptical of the content in the book: the corruption within Big Pharma and the FDA, and Monsanto (yes, this was eight years ago!), but I knew I needed more information.  He cited many websites, which led to me purchasing dozens of books.  The more I read,  the more hungry I was to know more.   He cited many reputable authors as his source of information such as Andrew Weil, M.D., Michael Pollan, T. Colin Campbell, M.D., Joel Fuhrman, M.D., and Marcia Angell, M.D., (The Truth About the Drug Companies) who spent two decades at the New England Journal of Medicine, and confirmed each and every disparaging story I’d ever read about the corruption of the FDA and Big Pharma (the pharmaceutical industry).
During that time frame, Dr. Oz was on Oprah every Tuesday.  I always recorded Oprah and Tuesdays were my favorite.  Dr. Oz, a cardiothoracic surgeon at New York-Presbyterian Hospital, wanted to educate America on their health.  For an hour every Tuesday, in addition to talking about poop, he confirmed many of the facts in Natural Cures.  I was shocked that Dr. Oz, with the popularity of a rock star, and Kevin Trudeau, a fraud and felon would have anything in common.   I decided in the summer of 2005, while living in eastern KY that we were going to eat 100% organic!  I had to laugh when I thought how ridiculous that sounded.  After all, some people were still buying lard in five gallon buckets at the local Food City.  At the time, there were NO organic fruits and vegetables in the produce section.   The only organic label you could find was on canned vegetables.  We would have to go to Lexington and stock up. At the time, there were two choices: Good Foods Co-op on Southland Drive and Wild Oats in Lexington Green, and of course the Farmer’s Market in downtown Lexington.  I told Jeff about all of the pesticides and chemicals in our food and insisted we change our ways.  Jeff was on board.   Soon after, our grocery bill literally tripled and then we began eight consecutive years of (exponentially growing) tuition.  We decided that something had to give and of course it had to be our new “hippie” diet.  (I’ve heard that said many times).   After that, we tried to buy organic at home whenever possible, and were more conscientious about labels.  Once we switched back to conventional food, everything tasted like chemicals, as if someone had accidentally mixed soap or Windex in the recipe.  I couldn’t believe I never noticed that before.  Was I really killing myself slowly?  Even worse, was I killing my family?


My intention for this post isn’t to “blame” Monsanto, the FDA, Big Pharma, Big Food, or even myself for getting cancer.   It’s just to talk about my journey here.  Was I drawn to this book because I instinctly knew that something was wrong or was God wanting me to use HIS medicine (organic food and herbs) to prevent this cancer that might have just began to grow?  I know that if I choose to use traditional cancer treatment (chemo, surgery, and radiation….), I must change my attitude about it.  After all I’ve read, is that possible? 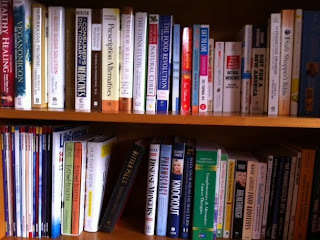 I have over a dozen more on my Kindle and a few which have been loaned to friends.  With the exception of the one from the American Cancer Society, I've read them all.
Posted by Unknown at 5:15 PM