It started as a normal day. Well...not really normal.  I actually took the day off so that I could tag along with Jeff.   He had a deposition that day and I had to get an ultrasound at St. Joe Breast Center.  They had called me back after a routine mammogram saying that it was different than my previous mammograms and I needed to get an ultrasound. I asked the lady on the phone if I needed to worry.  Then came the canned speech, similar to the form letter implying that many women are called back and a small percentage of them actually have cancer.  As I usually see the glass half full, I not only tried not to worry.  I'm contemplating lunch and dinner plans (we don't get out much).
Jeff drops me off at my 12:30 appt. and heads out for errands and his deposition.  I told him not to worry about picking me up because Lauren, who's off work for the summer, could do it.
I looked at my watch and asked the radiologist how long this was going to take because my daughter was going to be here in an hour.  She asked how old she was and I said, "Twenty-six. She just got married in October. I also have a 21 year-old son who goes to UK.  My phone is on the chair. Let me show you their picture."  The assistant handed me my phone with Lauren and Jordan on the phone case cover.  They looked at the photo..and then at each other and then at me.  "I'm VERY worried," she said, "VERY worried."  I'm sure I had a confused look on my face, so she turned the screen so that I could see a screen like the one I saw when I was pregnant and life was growing inside me.  I saw a black mass in the middle of the splotchy screen. She measured it just like the technician did 21 and 26 years ago to measure the sizes of my babies' heads.  My voice cracked.  "How big is it?"  It's 2 cm.  Since I never really grasped the metric system, I looked even more confused.  She said, "That's about an inch."  The radiologist then checked my armpit on the same breast. She said , "Your lymph node looks suspicious."  When she showed me what my other "normal" armpit looked like, I saw an obvious difference.  That's when I started shaking.  Almost every one of us has a family member or friend who has faced the Big C. The first question that many ask is, "Is it in the lymph nodes?"  I was trembling uncontrollably.  She said that they needed to do a biopsy to determine if it was cancer.  I asked the radiologist her opinion.  She said that the National Blah Blah Blah prevented her from saying that she was any more than 95% sure.  "With that being said...I'm 95% sure. Do you want to do a biopsy now or schedule it for later?"  Who would actually say "later", given the circumstances?  The biopsy procedure was virtually painless.  They numbed me with Lidocaine and made a  very small incision, There were a few clamping noises. I didn't watch. For the lymph node, they performed a needle biopsy, wherein they insert a needle and "catch" a few cells.   If it comes pack positive, it's positive. If it comes back negative, then it's only 75% accurate. 75% sure wouldn't give ME any comfort.
She said she knew I was shocked and asked if I wanted to call anyone.  I said, "My daughter is in the waiting room.  Can you get her?"  She said, "Will her presence help you or upset you?  I said, "I don't know but she needs to be here.  Jeff will be out of his deposition soon."  She asked if I could reach him, implying urgency and adding to my terror. I said, "Before you get Lauren, can I go to the bathroom?"  She helped me tie my gown because my hands were shaking.  She lead me to the bathroom and I dropped to my knees and threw up.

I had a flashback of showing up at St. Joe Hospital to visit my dad. He had just had his gall bladder removed. His planned laparoscopic surgery turned into the traditional cholecystectomy because of a previous hernia operation.    He was lying flat on his back and asked me to sit down. "I have cancer," he said. "They sent my gall bladder to the pathology lab 'cause that's what they do whenever you get anything removed.  "Doc" came and sat on my bed and said he was shocked to give me the news...he didn't see it coming."  He unsuccessfully fought back tears and said, "I'm going to fight it." That was December. He died in April.

When Lauren came in, my role changed from confused and terrified victim to mother.   I wanted to get this right 'cause someday she might remember this day like I remember sitting beside my Daddy's bed. He was 52.  I was 29.  She walked in and all I remember saying was, "Hi baby. It doesn't look good." She hugged me, sat on the exam table with me, put her head on my shoulder and cried.  I told her that we didn't know for sure. There's always hope but I'm preparing myself for the worst.  The radiologist is over 95% sure.  I said that if you're a woman and you have to have cancer, breast cancer is the kind to have.  I had read that somewhere. They took us to a small room where they talk to families and give them bad news.  But those are other people's families. Not mine.  Soon thereafter, Jeff shows up and the radiologist introduces us to the nurse practitioner, who introduces herself.  She wants us to know her history, but all I heard was, "I'm from ...(I have cancer)....I've worked with breast cancer patients for... (I have to have chemo).....years and have helped many women navigate...(Oh my God. I may have to have a mastectomy)....The radiologist said, "I know it's scary, but over 180,000 women get breast cancer every year and 40,000 women die of breast cancer." I don't know if I actually laughed out loud.  It immediately occurred to me that she's never been a salesperson.  I was imagining myself with my innate  sales skills,  trying to do the math in my head..."Every year over 180,000 women get breast cancer and eighty-three percent survive..."  Her voice was soft and compassionate.  I couldn't be mad at her. She was doing her best at comforting all of us.  I couldn't judge her because I'd be a terrible doctor.  Let me re-phrase. I don't trust most doctors.  I'll save that rant for another post but I realized that my opinions didn't only effect me once I looked at Lauren's face after I asked, "What are your opinions on alternative and holistic medicine?" She's like me...terrible at poker.  I saw panic.  The nurse gave me a 3 inch thick book written by the American Cancer Society on "complementary" medicine which she said she had read.  She gave me her copy, which looked brand spanking new.  The radiologist mentioned her best friend who is a naturopath in Oregon who told her that there are no good naturopaths in Kentucky.  I thought of Nadina in Paintsville. I beg to differ.  They said the biopsy results would be in Tuesday or Wednesday for the lump, and probably longer for the lymph node.  Now we had to tell Jordan and the rest of the family.

Jeff is the rock.  Strong and stoic when he thinks he needs to be.  Jordan is the eternal optimist.  If anyone ever complains about a bad day, he'll say, "well at least________".  He makes me look like Debbie Downer.  This day was no exception.   I decided to buck up, dry my tears and take my swollen eyes to Chili's to have dinner with the family, but I couldn't eat.
The drive back to Prestonsburg was a long and quiet one until I would imagine   myself in an operating room with a surgeon standing over me...or....sitting in a chair with an IV pumping poison through my veins..or losing my hair..or watching my own funeral unfold.  Then I would cry.
That night, while Jeff slept, I went outside so I wouldn't wake him. I sobbed and prayed for a miracle...that just maybe...that the radiologist was wrong. 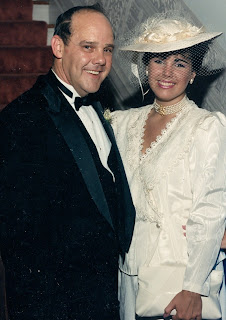