Jeff and I spent the night with Lauren and Jesse while we were in town for my first chemo treatment.  Their former office is now a guest room complete with a queen size bed and brand new bedding!  Lauren was sure to remember to set out all the funny photos that always make me laugh, like the one when she was 4 and I was 25 and we both had our eyes crossed.  There were lots of family photos from their wedding last year, a dry erase board with random happy facts, and a flower she hand-painted on canvas...because she know how much I love flowers.  She and Jesse pulled out all the stops and no doubt wiped out their bank accounts.  Of course, Liz and Barry, as well as many other friends and family have offered their homes as well.  But, I’m her Mama and she wanted to take care of me.
Let me first rewind back to the day when my family went to the infusion room to visit.  My first question was, “Is there a limit to how many people can come back here?”  Kim, the infusion nurse, said that our entire posse/entourage was welcome.

September 12, 2013- My first chemo session
(I never in a million years thought I would have to type “My first chemo session.”   I must be an early bloomer in the stages of grief because I still don’t think I’ve graduated beyond shock.)
The worst part about infusion day was my discussion with Dr. Moss about supplements, coffee enemas, and a special diet.  I brought in the book called, “The Chemotherapy Diet”.  Of course, my plan was to double up on the cancer cells and she’d kill them with her poison and I’d de-toxify with vitamins and herbs.  Jeff ordered all of the vitamins for me, so they’d be waiting for me when I came home.
I was armed with my book (which I know worked very well for at least one other person I know) and about 20 questions.  The look in her eyes told me I had overstepped my bounds.
#1- Doctors don’t like it when you take up too much of their time.
#2- Doctors don’t like it when you question their knowledge or training.
#3- Doctors don’t like to stray from the “normal”, that is, whatever the pharmaceutical study says that is “normal”.
Although Dr. Moss was very pleasant, and always has been, she admitted to never having heard of complementing the treatment of cancer with the vitamins/herbs in the book.  She did say that she wanted to know what her patients are reading (evidently they’re not reading any of the books I’ve read.)   She said she would look through it at lunch and devise an approved list of vitamins.  She said that most of her patients take only a multi-vitamin and they do very well during the same protocol I’m taking.   Then I said, “Did you ever wonder how much better they could have done if they had taken these herbs/supplements too?”  (Crickets Chirped).   She promised to look at the book, but also told me she doesn’t like surprises, so she errs on the side of caution.  I swear, I don’t MEAN to sound like a smartass, but I know I just came off looking like one.   But this is MY life I’m trying to save too!
I told her that if she thought the antioxidants would negate the chemo, OF COURSE I wouldn’t take them. But if she was on the fence and didn’t care, then I would.  She would let me know, she said.
I was the first one in the infusion room, so I had first dibs on the chair. One side of the room is cold, one is closer to the bathroom, another in front of the food and snacks.  Guess where we picked? Yep. By the snacks.  In addition to Jeff, Lauren, Jordan, Jesse, and Liz, my new friend Lesa arrived with Gigi’s cupcakes.  Soon thereafter, our new “Savannah” friends Brian and Debbie arrived for morale support.  Debbie works for Hospice and was thoughtful enough to remove her work badge before visiting.  (That one made me laugh!) Lastly, my buddy Cinder came with her bucket of sunshine and cheer.
I was feeling pretty loopy at the time. I introduced my son Jordan to my friend Brian as my husband.  (Lots of laughs).  I actually ate a Gigi’s mini cupcake during the infusion.  Maybe I’ve seen too many terrifying movies about cancer and chemo.  Eh.  Not so bad.  I’ve got this. 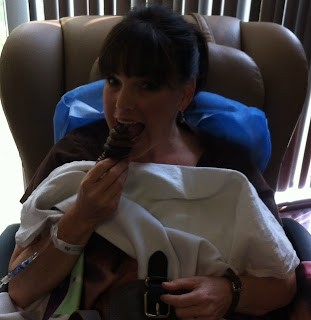 The next day, 24 hours after finishing each round, I would have to go to the office for a Neulasta shot.  Neulasta is a medication used to help stimulate the white blood cell count in your bone marrow.  It can cause bone pain.   Dr. Moss returned my book and made a quick mention of limiting visitors to two in the infusion room.   What?!!  But the infusion nurse said that my entourage was welcome.  “It’s for the safety of the nurses and patients.”  I’m sure we could find a better place to sit, one that was out of the way.  No dice. Apparently, my friends, family, and I are responsible for setting another “new” policy.  We must have been having more fun than I thought.  Feeling duped, I was pretty upset that I signed on for $200,000 worth of poison under the pretense that my loved ones could support me (and keep me from bolting).  She also returned a list of approved vitamins, naming about five. Apparently 20 of them would affect the efficacy of chemo. Really?!!
Although I felt frustrated, angry, and betrayed, physically, I felt pretty good.  I hadn’t slept the night before (steroids, anxiety…).   I was just a jittery, sleepy mess, with a terrible headache.   Still much better than I imagined.
I spoke too soon.  I posted a Facebook message my first day after chemo last week.  It said something like, “Doing better than expected after first round of chemo, although I can count the hours I have slept in three nights on one hand. At least I'm not nauseated! Counting my blessings.... Thanks so much for all the positive thoughts and prayers. They are definitely working so far!”   At that particular time, I must have been pumped to the IV gils with my long list of anti-nausea, anti-inflammatories, and anti-misery drugs.  As much as I despise taking them, I didn’t have any of those symptoms on Friday that I certainly had on Saturday and Sunday.
Not everyone has symptoms from Neulasta, however, if you’ve had previous bone issues or arthritis, you might as well plan on two of the longest nights of your life.  If you’ve been reading my blog, and happened to catch the entry called The Incident, you’ll see why Saturday and Sunday seemed to never end. All weekend long, when I would doze for seconds at a time, I would dream I was falling out of that Jacuzzi over and over again, feeling my shoulder dislocate each time.  I would wake up with my teeth chattering, nightgown drenched and have to change clothes.  On top of everything else, chemo often puts women into early menopause.    My hair hurt, my bones hurt, my teeth even hurt and I had a migraine.  The best description I can give about chemo, for me, is this:  Imagine that you have the worst flu you’ve ever had. Everything aches, even your hair.  You have a migraine headache too, but the Tylenol the doctor suggested doesn’t touch the pain. No other OTC pain medication can be taken or it affects the white blood cell count.  You’re walking in the rain, teeth chattering, bones trembling and trying to walk is nearly impossible.  Then, a train hits you.  My breast was even starting to swell again.  Jeff tried to wrap an Ace Bandage around my chest but I couldn’t stand anything binding me.  The poor man.   I know he must have felt helpless.   I sent him to the store for saltine crackers, Sprite, ginger ale, and chicken noodle soup.   All I could do was cry and tremble uncontrollably.    After slipping into a scary, dark place, I begged Jeff to pray that I would wake up Sunday morning.
I told myself that if I did wake up, I would spend this week searching for a new place for my infusions: a place that would welcome my supporters ……every last one of them.