Monday was Martin Luther King Day so the doctor's office was closed and I got a much needed reprieve from radiation treatment.  On Tuesday, I loaded up my Mini Cooper with a ridiculous amount of luggage and headed to Lexington.   I'm a serious over packer.  Better safe than sorry, I always say.

It normally takes two hours to drive from Prestonsburg to Lexington, but thanks to the icy roads, I spent four hours with white knuckles during that drive..  I knew it was going to be bad when I had only driven a mile from my home and slid while navigating a curve.  A woman in front of me wasn't so lucky and swerved into a tree.  I pulled over, called 911 and waited with her until help arrived.  She appeared to be ok, but the incident made me even more tense for my weekly drive to Lexington.  I was counting down the days until radiation was over. January 24 was supposed to be my last day but some blistering radiation burns put me a few days behind.

Jordan's girlfriend, Oriana, was turning 21 this week and I was looking forward to throwing a Downton Abbey party over the weekend. She and I are both fans of the show and I thought it would be fun to act British for a day.  She's quite the actress and loves parties. Besides, I was living vicariously as I've always loved everything Victorian.  So, before leaving town, I got the silver tea set and china (very Victorian) from the attic.  I think we've used it twice since we got married almost 28 years ago.  I figured it would be the perfect opportunity to clean the silver at Lauren's house, while she was at school.  I packed it in a Rubbermaid container and placed it in my front seat.

Weeks ago, I had ordered a Downton Abbey cake from Cakes by Julie.  Juliana NEVER disappoints.  When I picked up the cake on my way out of town on Friday, I was in awe. 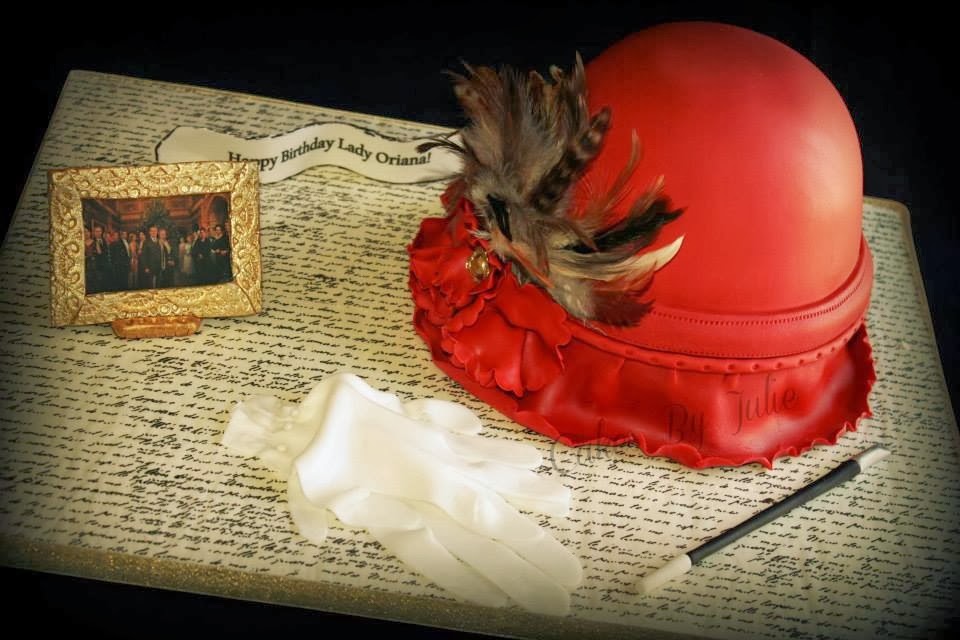 Cakes by Julie's masterpiece.  Everything on the board is edible except the feathers in the hat.  The frame has an edible photo of the cast of Downton.  The cake under the fondant hat was red velvet.


After leaving Juliana's house, I bought all the scones (they didn't have crumpets) at Starbucks and headed for home.  I carefully wedged the cake in the floorboard so it wouldn't budge during the drive. I took off my itchy wig and laid it in the front seat.  Writing these details seem ridiculous right now, but soon you'll see why they're important.

About forty minutes into the drive my oil light came on. I was just a few miles from the Stanton exit and thought I could make it to the gas station to fill up the oil. Seconds later, the "Check Engine" light started blinking. Crap. Just 1/2 mile later, smoke was billowing from under the hood. I pulled over to the shoulder and the engine stalled. I had high hopes of the friendly fellows of the KY Transportation's SAFE PATROL bringing me some oil. While scrolling through the S's in my phone, I saw in my peripheral vision flames shooting from under the hood! Oh my God!

I panicked, grabbed my purse, and ran as far as I could away from the car. I called 911 and told them my exact location. Meanwhile, drivers behind me saw the flames and immediately stopped. We were all afraid of an explosion. I was about 100 ft. away and saw my little car totally engulfed in flames.  I called Jeff and started to cry. "My car is on fire, " I sobbed. "What? Where are you?" I told him and he said he was on his way. Then...a very nice man came out of his car and introduced himself. He guided me over to his family's car and suggested I sit with his wife, niece, and nephew. I sat in their car and watched my Mini Cooper burn. A few minutes later,  Lauren called.  "Oh My God!  Where are you? I'm on my way!"  Next, the sirens. Three police cars and a firetruck screech to a halt not far from my car.  I had scary images of that just-filled gas tank exploding. I felt a hand on my shoulder. "Don't Cwy. I'm sowwy about your caw," the little boy said in the back seat. I turned around and looked at his big blue eyes and said, "I'm not upset about the car. I'm sad about what was in it. I had a big beautiful birthday cake in there. We were planning a party for this weekend. " They looked at me like I was crazy. Then I showed them a picture of it from my phone. "Wow! That's too pretty to eat, " his aunt said. Then it occurred to me that just maybe something could be salvaged from the back seat.  I knew the cake was a goner but thought about my two computers and all my clothes in the suitcase.   I thanked them for letting me sit in their car and walked toward one of the firemen. "Is there any way we can open the hatch to see if anything is salvageable? I've been in Lexington for several days and have clothes, computers, silver..." The car was steaming while they broke the glass with an ax.  I was relieved as they pulled out my wet, soot covered suitcase.

The policeman said, "Is there somewhere I can take you?  Maybe to the McDonald's so you can meet your family?"  That sounded like a good idea.  For the first time, I rode in the back of a police car.

Minutes later, Lauren arrived. We drove to Banks Towing Company to see if anything else was salvageable. 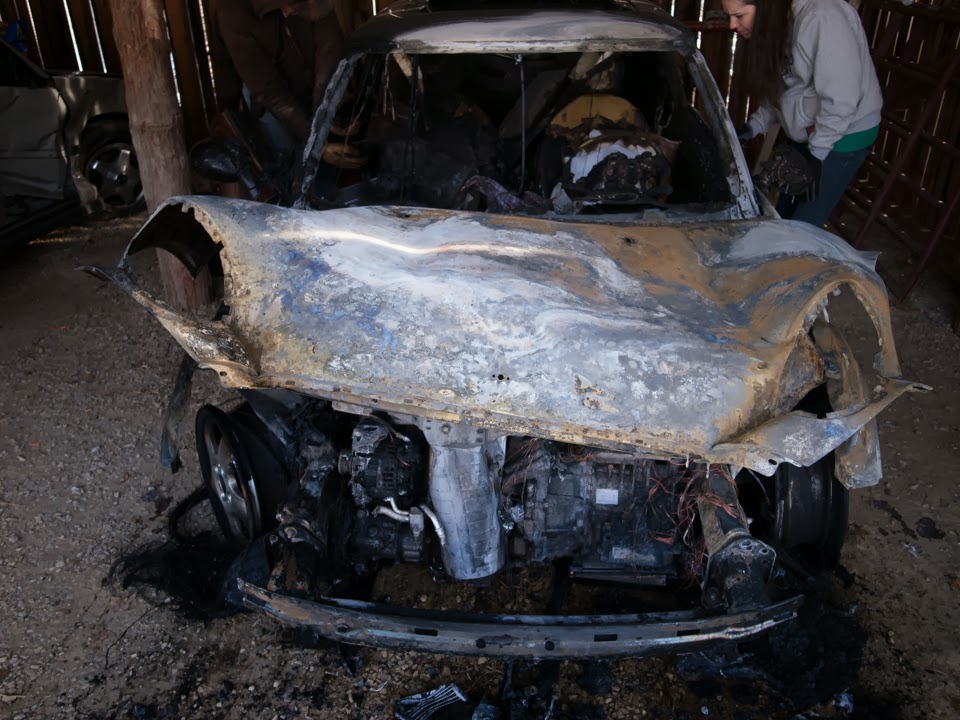 The remains of my 2009 Mini Cooper 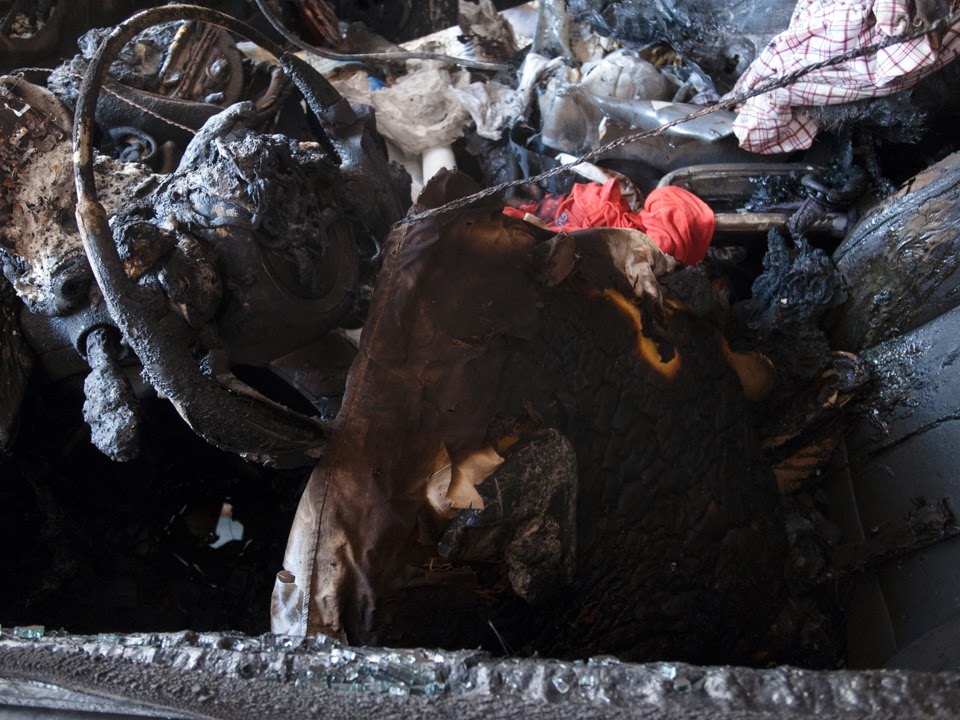 Although I had thousands of dollars worth of clothes, cosmetics, electronics, and yes...silver in the car, all I could think about was that cake.   When the owner of the Banks Towing helped me pull out the contents, I found the charred remains of my favorite wig (sorry, Carol),  my favorite pillow (irreplaceable!), a couple of  wet computers, the silver tea set (saved!) and my soot covered cosmetic bag.  Mr. Banks got a big hug for that one! The clothes were all singed and stunk of burnt rubber.  Lauren and I did find a soot covered box of chocolate covered bananas which I had bought at Whole Foods before I left town.  (You can't buy them in Prestonsburg).  We opened the box to find five perfectly wrapped beauties.  So, we made lemonades out of lemons, laughed, and ate ourselves a perfect, slightly-thawed chocolate banana while we waited for Jeff in her toasty warm car.  He arrived shortly thereafter, took the photos above, and drove me home.

On the way home, I remembered something that was in my glove compartment.  Jordan and I had just spent a few hours together the day before.  We'd eaten at Dudley's (my favorite restaurant) and gone to Glover Books where he was searching for an old rare book.  He found what he was looking for (written in the 1800's) and placed it in my glove compartment.  I dropped him off on campus at UK and the fragile book  never made it to his backpack.  I was sad that his momento from our afternoon together was destroyed.

Lauren and Jordan knew how upset I was over the cake so they decided we would all bake our own masterpiece on Saturday.  Lauren bought fondant to wrap the cake and make handmade  roses and I baked a red velvet cake from scratch. Jordan and Oriana made chocolate butterflies and helped with the fondant.  I think it was quite beautiful for our first fancy fondant cake. 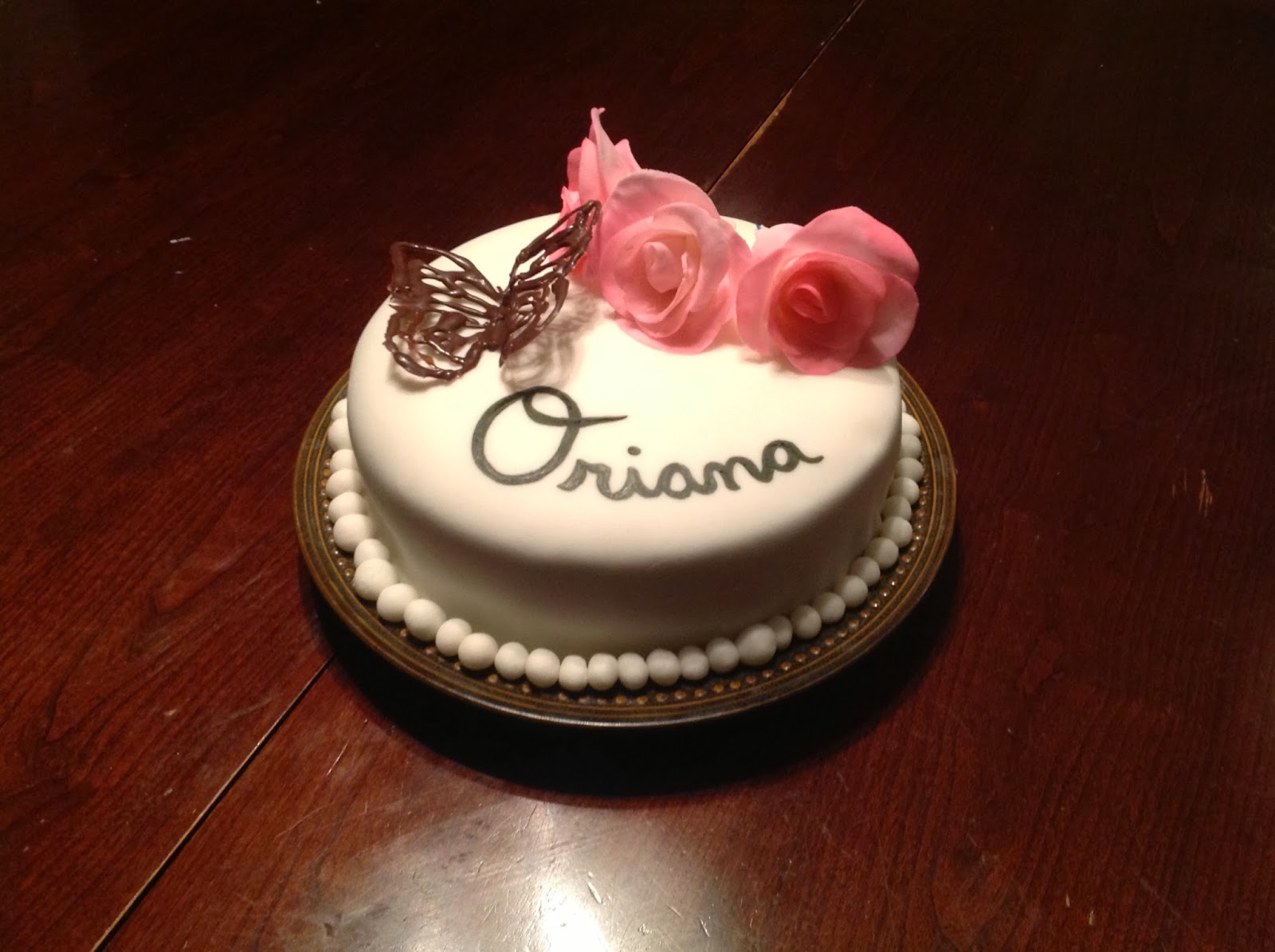 We had a great time creating our own masterpiece! 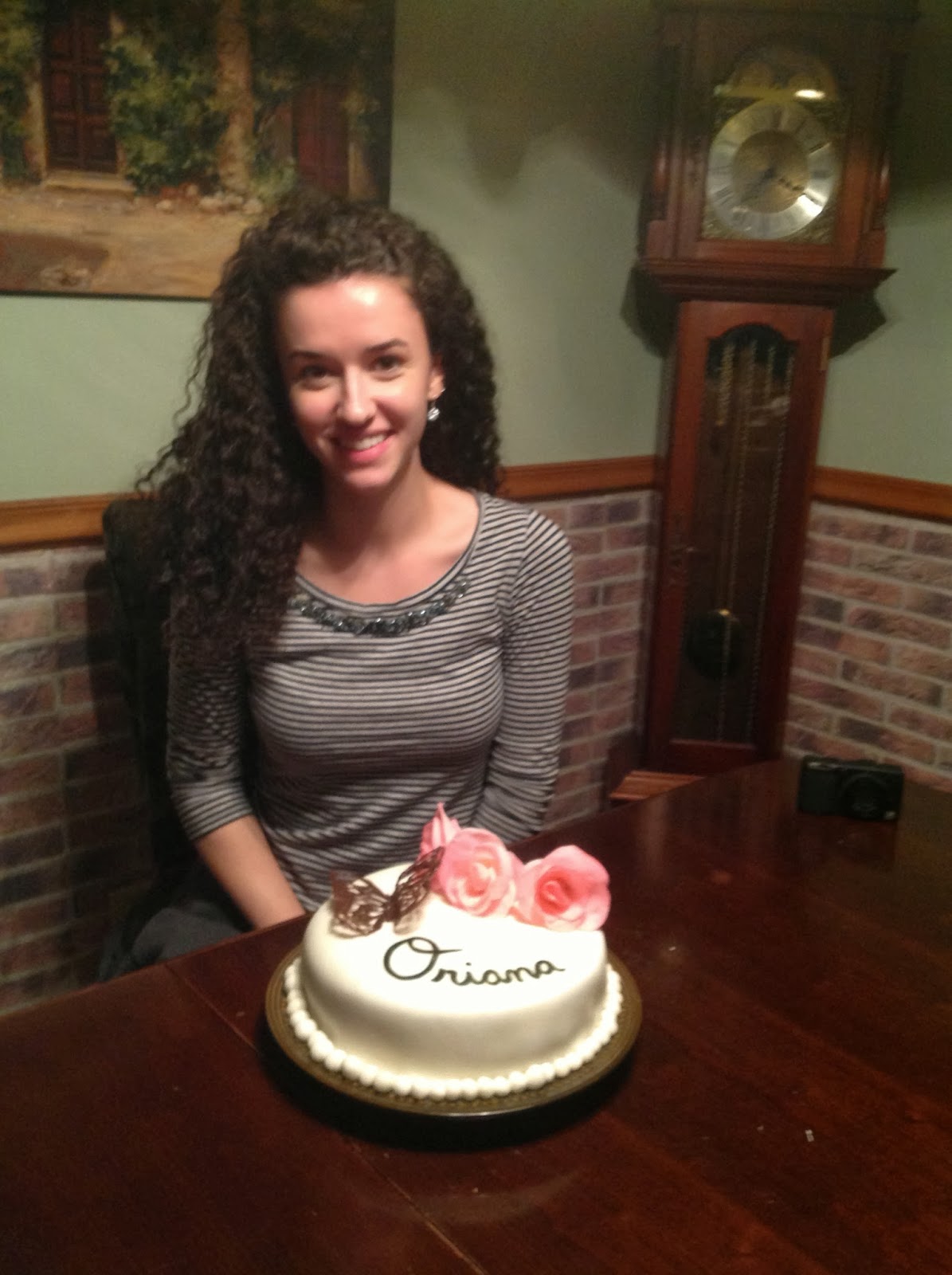 Just when I started feeling a little down about my losses, I got a phone call from my friend and former co-worker Jamie.  She said, "You must have a guardian angel on your shoulder!  First you kicked cancer's ass and now you've escaped a burning car!"

Thanks for the new perspective, my friend.