I had to be at the Central Baptist Surgery Center by 8:30 Friday morning.  Of course, I couldn’t eat or drink anything after midnight the previous day.   The night before, I had three different dreams that I had woke up in the middle of the night and devoured stuffed grape leaves and chocolate truffles.  Each time (in my dream), the morning after, I would have to tell the people at the Surgery Center about my impulsive gluttony the night before the most important surgery of my life.  During each dream, I had a different person (Dr. A.J. and my former band director J. Larry Moore - ?- were two of them) tell me I had to reschedule the surgery.   I was so relieved each time when I woke up with my stomach growling.
My posse (Jeff, Lauren, Jordan, Liz, and Gail) and I waited for the nurse to open the door and call out, “Family of Elizabeth Damron…”.  Meanwhile, we marveled at the cool children’s playhouse in a room adjacent to ours.  I told Jordan he needed to go climb in there and stick his head out the window so that I could take a picture.  Unless heights or drugs are involved, he’s not usually one to pass on a dare.  Besides, as you’ve already guessed, I sometimes use comic relief to help me through anxious moments.  He was willing to do almost anything to humor me.   Jordan walked over to the abandoned playhouse and tested the wooden ramp to ensure it would hold his 6’ 3”, 175 lb. frame.  I had my phone ready to snap a quick picture.  The waiting room was far from empty and most of the other nervous patients were less than amused.  My 21 year-old, climbed up that ramp, stuck his head through the tiny window and struck a classic ‘Heeeeeeeere’s Johnny!!!” devilish smile from The Shining.  Even Jack Nicholson would have been impressed.  I snapped a quick photo and we all giggled like high school students e-mailing each other the photo.  The staff there never saw us coming.
They finally called my name and said that my entourage could come back two at a time to stay with me before surgery.  Despite having completed lengthy questionnaires concerning my health history, three separate nurses both asked the same questions .. “Do you have or have you ever had…high blood pressure? heart disease? diabetes? kidney stones? liver failure? Do you smoke or have you ever smoked?  Do you use recreational drugs?” No.no.no.no.no.no.no. Cancer?  Ugh. This was a first.  I felt that familiar kick in the gut again.  Then I realized that I will always have to check the YES box after that question.   I started shaking violently and they gave me another warm blanket from the toaster.  They proceeded to ask me about my medications and were pleasantly surprised to hear me say, “None”, now that my oncologist took me off my bio-identical hormones.  Each nurse asked me what surgery I would be having and where on my body it would be.  Of course, I wondered why they didn’t already know this information, but then remembered when I recalled some past news articles about surgeries performed on the wrong body parts.
Lauren and Jordan came back first, asking what I’d like to eat when I was in recovery.  I’ve had several surgeries over the years and know that I always wake up hungry and my teeth chattering uncontrollably. I said, “Chocolate fro-yo from Orange Leaf with bananas and whipped cream on top.”   Lauren said, “You got it, Mom.”  Jordan followed… “Keep your eye on the prize, Mama!”
“You’re making me hungry!” my surgeon, Dr. A.J., said as he pulled back the curtain.  According to many previous patients and the Lexington medical industry, I had the best surgeon in town.  It sure didn’t hurt that he was compassionate, charming, and very handsome.  While asking some basic questions, he pulled out a Sharpie and marked an x or something like it on the left side of my chest.  I imagined myself as a surgeon, chatting with my staff during a procedure, “What did you all do over the weekend?”  or “Have you seen the new movie…?”    Then….”Wait! Wasn’t this lumpectomy supposed to be on the left breast?”   Good thing I chose a different profession.  Then…I asked Dr. A.J. for a strange request.  I asked him to take a picture of the tumors because I want to see what I’m fighting.  He said he understood and would find a way to get a photo for me.
Shortly afterward, Jeff, Gail, and Liz relieved the kids, scolding them for hogging the visitation minutes with me.  I smile because it’s nice to have them argue over spending them with me.  There wasn’t time for much more than hugs and kisses from each of them.   The nurse put a sterile cap on my head and tucked in my hair.  Gail pulled out her camera as she was probably anxious to post photos of me on Facebook looking like a cafeteria lunch lady.  Liz and Jeff told her that it probably wasn’t a good idea.
As the nurse rolled me back into the sterile room, I told her that this is the time when I usually “lose it”.  She said that they were going to take really good care of me and not to worry about a thing.  They lifted me up onto another gurney and wheeled an arm rest next to my left arm to keep it stretched out perpendicular to my body.  I grimaced when she placed it on the padded arm rest.  She said, “Does that hurt?”   I told them about my “incident” during our 25th anniversary celebration...bubbles and all.  She told me to move it to where it was comfortable for me.  The last thing I remember hearing was Dr. A.J. say, “Bless her heart.”

One of the worst parts about having surgery is waking up.  Thank God I never wake up nauseated but I’m always annoyed.  “Ann….Ann…Ann…wake up….Ann! Ann!   Open your eyes!”  It reminds me of my mom trying to wake me up for school when I was a teenager.   On a few occasions, out of desperation,  Mom poured cold water on my head.

Shortly thereafter, the nurse said she wanted me to have some crackers and asked if I preferred saltines or graham crackers.   I chose the latter, and ordered a chocolate bar and toasted marshmallow with it.  They just didn’t know what to make of me.   The nurse mentioned something about me being funny while I was coming back to conscienceness.  This statement always worries me.  When I was in my twenties I had my wisdom teeth extracted in Lexington.  I was given the “twilight sleep” form of IV sedation and woke up to several nurses laughing hysterically saying, “You are sooo funny!”  They never would tell me what I said or did that had them laughing so hard.  Pretty disconcerting.
“What did I say?”  I asked my nurse Lisa yesterday.  She said, “What happens in the O.R. stays in the O.R.”   Hmmm.  With a little coaxing, I learned that I told Dr. A.J. that he was cute.  Eh.   That’s pretty harmless and hardly a comment worthy of post surgery laughter.  There are some things one never wants to know, I guess.

Then, I cried my first tears of the day. Happy tears. Lauren carried in a vase of a dozen roses from her friends Krista and Jennifer and read the card to me.  It was a beautifully written, thoughtful message which made me cry “the ugly cry”.
A few hours after surgery, they released me.  Jeff, the kids, and I hung out at Liz’s house for several hours.  I couldn’t believe how great I felt.  The painkillers were working but not making me too loopy.  There was very little swelling, which was sure to come tomorrow.   Dr. A.J. said the pathology report would be in next week and we would discuss the results, which would hopefully tell us that radiation was unnecessary.

Ever since the day I met her over twenty years ago, Liz always said that I’m the sister she never had.   She always signs her e-mails, cards or notes “I love you more than _________”   The prized possession always changes, but because of our past experiences, I always get the reference and feel the love.
Sylvia, my longtime childhood (Bohemian Rhapsody) friend who now lives in Indiana, wanted to take time off from her new position and see me before and after surgery.  I asked her to save her time for one of my chemo days, when I would be lucid. Those infusions last for hours and I thought it would be nice to actually remember all of her visit.   I’m so touched that she would spend six hours drive time..and take time off work…to stay with me during the infusion.
Another dear friend, Carol, also said she will take a day off and stay with me during a chemo session.  I’m just so lucky to have such good friends!
Chemo will likely start the last week of August or the first week of September.   I will have a port installed a few days before.  For those of you, like me, who are unsure about why exactly oncologists think they’re important, here’s a brief explanation:
How is the Port-A-Cath used?
Generally chemotherapy drugs are very toxic and irritating to the skin, tissues and veins. Giving such potent medications into a small vein can irritate and cause inflammation of these blood vessels, resulting in long-term scarring and blockage of these veins. Also, giving chemo into a small vein allows the medication to leak into the nearby tissues and cause tissue damage. As a result, such medications are administered into a large central vein so that they can be immediately diluted by a large volume of blood and be delivered effectively throughout the entire body. The chemotherapy drugs are usually administered into the Internal Juglar or Subclavian vein; but sometimes Brachial vein may also be used. Studies show that the use of the Port-A-Cath in treatment & management of cancer patients, results in shorter hospital stay, less nursing time spent trying to access veins, preservation of the small veins, fewer emergency visits, decreased cost of therapy and overall greater patient satisfaction. As a result, the port serves a safe and effective route of giving chemotherapy drugs.
How is the Port placed?
Placing the Port is a small surgical procedure and takes less than an hour. It is performed by an interventional radiologist under local anesthesia with IV sedation.The procedure involves a 3cm skin incision on the chest wall for the port pocket and 5mm incision in lower neck to enter the vein. The port is placed completely inside the body. One end of the catheter is inserted into the vein while the other end is connected to the portal, under the skin. The tip of the catheter lies in a vein just above the heart.

There will be eight separate sessions lasting 16 weeks (every 2 weeks). The oncologist says that due to the “dense dose” and the frequency of the infusions, my immune system will be seriously compromised, and I will need to stay out of convenient stores, which is what I do for a living.  I should be ready to resume work around January 2nd.


Liz, Grant, and me -hours after surgery 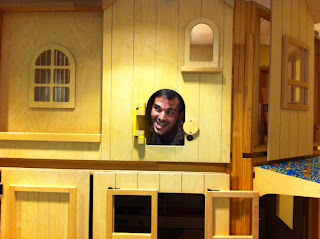 Heeeeeere's Jordan in the waiting room at the Central Baptist Surgical Center.
Posted by Unknown at 6:39 AM