God, please don’t let me be like Leoma (pronounced Lee-O-muh).  Leoma was a relative whom I don’t remember ever meeting, but my mom mentioned her name whenever anyone complained about their aches and pains.   “Lord, she sounds like Leoma,” said Mom, when a neighbor would come over and whine about her back pain.   I don’t know if Leoma was from my mother or father’s side of the family.  Heck, for all I know she was a character in a book or a figment of my mom’s imagination.  Apparently Leoma had every illness and ailment known to man and she loved to tell everyone all the details.  As I type the next few paragraphs, I can hear my mom say, “Alright, Leoma….”

Chemo brain is not a myth.  I’ve started this post six times, deleted, and re-typed the same sentences because they made no sense to me.  The nausea, fatigue, and hair loss (yes, I’m serious) don’t compare to the frightening aspect of losing my mind.  It seems that all of the side effects of chemo are cumulative. It takes longer for me to recover (physically and mentally) from each treatment.  Six days after chemo round three, Jeff comes out of the bathroom and says, “Uh, honey….look what I found in the toothbrush cup.”  He’s holding my toothbrush with a neat little blob of Arm & Hammer Extra Whitening toothpaste.  I actually loaded the toothbrush, thought I brushed my teeth, and stuck it back in the cup.  Now, that’s funny.

I just can’t seem to focus on anything.   I’ll start a task, i.e. throw a load of laundry in the washer, and think…I forgot to take my medicine!  I leave the laundry basket on the utility room floor and go to the kitchen.  I pick up the empty pill bottle and realize that I forgot to call in my refill.  I search the house for my cell phone to call the pharmacy and see that I have several text messages and voice mails.  I reply to those, which leads to an hour on Facebook.  Meanwhile, I’m asking myself , “Did I give Buddy his insulin shot this morning?”   I keep saying ,”FOCUS, ANN!”  That seems to work as well as telling someone who is irate to calm down.

It’s common knowledge that many people get very queasy on chemo….for weeks! I’m blessed with only three days of wretched nausea (days 3, 4, and 5 following infusion), but the fatigue gets worse each time. Normally, this is my “good week”, but the fatigue is still bone deep.  I ran some short errands Monday (post office, pharmacy, and the grocery store).  Afterward, I went outside to cut down some of the annual flowers and plants that have frozen and withered.  After ten minutes, I literally collapsed to my knees.  I had hit the wall.  It literally took me an hour or more to catch my breath.

Although I’m complaining, I’m grateful I’m not having some of the issues that are common among chemo patients (heart problems, dehydration, and extremely low white blood cell counts).  As a result of chemo, the brave woman I met last round (with the boxing gloves) had to make a trip to the hospital due to heart problems.  Dear Lord, she’s younger than me!

Ok, let’s talk about the eggplant.  Since my emergency surgery on August 29th, when they addressed the hematoma (swelling and bruising from the blood clots), my left breast seems to be about the same size (and color!) as my right one.  However, there’s just one problem.   Right at 4:00, where my tumor used to be, is a huge eggplant-colored lump.   Ok. Let me define “HUGE”.   Imagine you have a golf ball, and it’s purple. Cut it right down the middle and glue it to the underside of my boob. Yep. It’s attractive…and painful. Dr. Moss said that it’s normal for any cut, bruise, burn, or injury to become inflamed during chemo.  After round one, the “lump” almost returned to normal.  During round two, it was inflamed the week following chemo.  After this last infusion, I haven’t caught a break.  Who knows what will happen after my fourth and final round?  Will it explode?

Lauren and Jordan came home Saturday to celebrate Jordan’s 22nd birthday.  Lauren had a sore throat and wore a mask so she wouldn’t spread the joy.  Between the two of us, I think we used a whole bottle of hand sanitizer!   Jordan requested Yoder’s butterscotch pie AND one of my homemade apple pies instead of a birthday cake.  We watched some home movies from 1994-96, laughed hysterically and realized that this is most fun when significant others are absent.  Watching other family’s home videos is intolerable!  We played a game of Settlers of Catan and Balderdash and I won at Catan.  I considered this a major feat since there is some strategy involved in the game.  Take that, chemo brain! 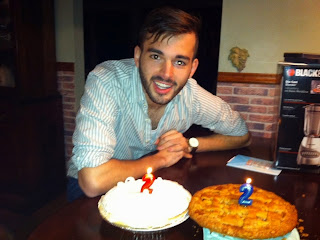 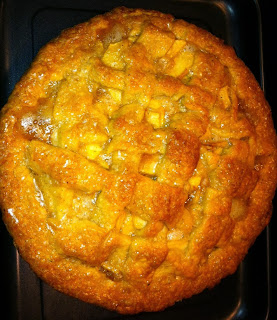 My homemade apple pie. Eat your heart out, Martha Stewart!

Yesterday I had an appointment with Hope Cottrill, an oncology gynecologist.  I honestly had no idea such a profession existed.  (Thank you, Ramona, for the recommendation).  Since breast cancer can be fed by estrogen and progesterone (mine is), it’s important to have a physician who is trained in the treatment of breast cancer and regulating female hormones.

While waiting in the exam room, I got a text message and photo from my boss Jeff.  He was at my top-selling store who recently sold a $1,000,000 winning Powerball ticket.  J.R., the manager, and Rachel, the assistant manager, were on the local news.  I was so happy for them yet sad because I wanted to be there for the party.  I’m constantly grateful for my compassionate co-workers and a supportive and understanding boss and company.  Man, I'm lucky.

Dr. Cottrill spent quite a bit of time with me discussing past history and whether or not I would be a candidate for ablation.  Because I know that many men read my blog, I’ll refrain from any details about my desire for this procedure.   She recommended an ultrasound and an endometrial biopsy.  The latter was similar to the beginning stage of labor pains.  I couldn’t help but cry.  Not because of the pain.  I’m just tired of it all. Tired of being poked, prodded, groped, snipped, sewn, taped, and told, “Here are your options…..”  These days, my life often depends on making the right decision and I’m too overwhelmed to decide where to go for lunch.

The bottom line?  A 4 cm fibroid (benign) tumor in my uterus.  A hysterectomy is an option.  I’m thinking my body has been through enough trauma for now.  Radiation starts next month and I’m anxious to start de-toxing and healing.  Ablation would be less invasive but there’s a possibility it wouldn’t help my situation.  The biopsy results should be in next week and I will know more at that time.

Now….I’m saving the best for last.  Yesterday, Jeff and I went to Joseph-Beth Booksellers, Lexington’s biggest and finest bookstore.  On the Best of the Bluegrass table…. sat Jeff’s book Road of Regret.  I almost screamed!  I took some photos of him beside his third born child and I was beaming with pride.  We wandered over to the “Staff Picks” table and saw more copies on the wall behind it, right under Tim Conway’s autobiography. The look on Jeff’s face was priceless.  The moment…surreal. 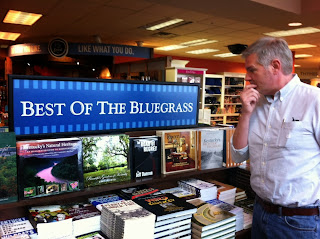 Jeff and his book at Joseph-Beth Booksellers