What a week.  With four chemo sessions under my belt...and now finished, I thought I had all the symptoms and their duration figured almost to the hour.   Usually on Tuesday, I’m feeling much better, but I suppose after four infusions, the toxic load has taken its toll on me.  After Monday, I no longer have “the spins”, only a slow burning churning toxic feeling in my stomach that seems to be slowly seeping out my pores.  (I hope you’re not eating while reading this!).   Whether I want it or not, I’m choking down spinach, kale, broccoli sprouts, blueberries, strawberries, and drinking Chlorophyll.  I drink it with a big glass of water with lemon essential oils and I always feel better afterward.    Except for birthday parties, sweet goody gifts, and restaurant visits (which isn’t that often), I’ve eaten remarkably healthy during chemo. I now make fruit and veggie smoothies with almond milk, flax and chia seeds, and have eliminated all alcohol and coffee.  Under normal circumstances, I might have lost a few pounds, but thanks to the steroids, that’s almost impossible for me.  Honestly, I’m not worried about a few pounds. I just want to be back to my fat, happy, sassy self again.  Actually, scratch the “fat” part of the last sentence.  Breast cancer is more likely to reoccur when you’re overweight.

Now that the queasiness has subsided, I’m dealing with crazy hot flashes. On the inside, my bald head feels like you could fry an egg on it.  When I touch it, it’s just a cold, sweaty, stubbly orb.  I’m not sure if the hot flashes are a symptom of chemo or the fact that I had to quit taking my progesterone (which was feeding the tumors).  I venture to guess that it’s probably a combination of both.   I’m either walking around with a bag of frozen corn on the top of my head or I’m teeth-chattering cold.   If I’m walking around bald, my head sometimes feels like I rubbed Vicks Vapo-Rub on it.  It’s freezing!  I put a hat on and end up throwing it across the room within minutes.  I assure you, if I’m in public when one of those hot flashes hits me, the wig will be coming off right then and there.  I just hope the sight won’t make small children (or adults) cry.

My last chemo infusion was on November 14 and I had planned a birthday celebration for the night before.  In the blog entry named Serendipity, I described our trip to Stuartos, a Lexington store which sells cooking oils, vinegars, salts and sugars.  The manager had mentioned monthly cooking classes so I decided to schedule one as a birthday gift for Liz.   Grant, Liz's son (and my Godson) who had just recently, turned 16, has always been quite a foodie, claiming creme brulee' as his favorite dessert when he was in kindergarten.  I think he was the only one at the table ready to take notes on the chef's instructions!  The classes are held at Spindletop on Iron Works Pike and participants eat a four course gourmet meal while the chef explains to 60 participants what he’s doing.  There are a couple of TV screens, for those serious about learning how to duplicate his efforts.  The chef uses Stuartos products, of course, for the dishes and tries to sell you on becoming a Spindletop member, which I found really annoying.   Our birthday party began once the chef had gone home and we brought in our own cake.  Liz and I are both big fans of the Wizard of Oz so I decided to hire Juliana Jenson (Cakes by Julie) to create a birthday cake for her.  Julie never disappoints. 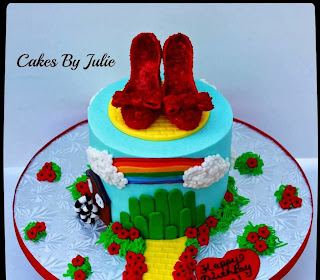 I love those ruby slippers and  the rolled up stockings under the house! By the way, it was ALL edible! 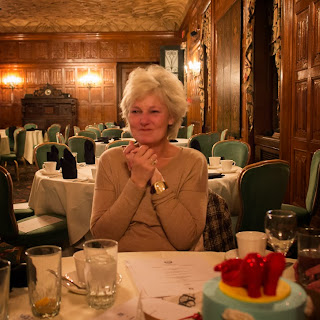 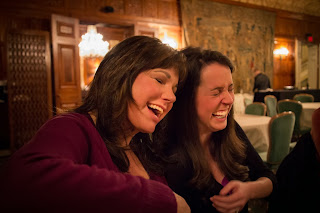 Lauren laughing at my version of "The Lollipop Guild" song

For my last infusion, my new breast cancer survivor buddy Lesa, came to visit toting, of course, Gigi’s mini cupcakes!   What a doll!  We got some time alone to discuss hot flashes, new boobs, procedures to acquire the aforementioned, and her upcoming move to a new home.   A voice in my head always tells me I can do this after a few minutes with Lesa. 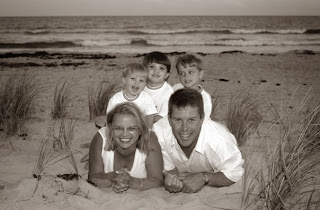 Lesa and her gorgeous family

Liz showed up with a bouquet of happy sunflowers and my favorite Panera salad.  Kim, my infusion nurse, pumped my veins with so many anti-nausea drugs and steroids, I was talking even more than usual and eating anything that was thrown my way.  I was all but giddy that this chapter of my treatment was almost over.
Soon thereafter, my sister Gail came, carrying a big bag of family photo albums.   We poured through each one laughing at our big hair, my ridiculous 80’s make-up, and how we wish we were as thin as we were when we thought we were fat.  I always like to reminisce, but Gail has a memory like an elephant.   She remembers everything.  Normally I say, “Wow! I had completely forgotten about that until you mentioned it!”  Now, with my chemo brain that day, I think she was just messing with my mind. 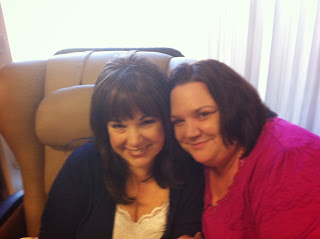 I made amends and apologized to the nurses for causing an uproar about the guest policy issue.  I recognized that I had, in fact, been a drama queen and came to the realization that it’s not all about me.  Although there are plenty of patients who like to talk, some are in pretty bad shape, just hoping for some solitude while being pumped with poison.
Kim, my sweet nurse, presented me with a certificate for completing my chemo.   At the time, I felt I’ve never suffered more for any diploma.  I began to wonder why Dr. A.J. didn’t give me one for my surgery, the drains, and the emergency surgery.  Hell, I deserve a trophy for that eggplant/honeydew fiasco!

The day ended with a celebration at Chili’s.  I get a few weeks to breathe before radiation.  More on that soon…. 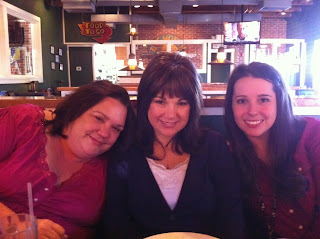 Gail, Lauren, and me 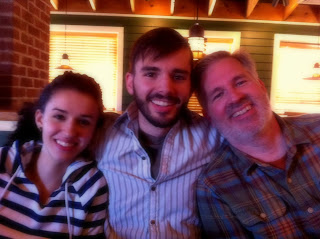