The Elephant in the Room

My friend Cinder read recently that oncologists, when giving the cancer diagnosis to their patients, are rarely asked "Will I live?", but are almost always asked, "Will I lose my hair?"
When the bomb dropped on me, I think my first thought was about my dad who died of cancer when Jordan was two years old.  He doesn’t remember him.  Will I see my grandchildren?   I’m not sure which thought came next - losing my breasts or losing my hair, but all three of those thoughts would probably terrify most women.   When I was inconsolable over the idea of chemo, the nurse practitioner at St. Joe Breast Center said, “I hate my hair but the idea of losing my hair is much more traumatic than losing my breasts!”  Wow. That was brave of her to make such an honest statement.  Over the past several weeks, one of the first questions people ask me is, “Did they catch it early?” or “Will you have to lose your hair?”   Most of the time, it’s the elephant in the room and everyone is wondering about the hair.  They’re just afraid to ask. Afraid I might collapse into a sobbing maniac at their feet. Well, I doubt that would happen in public, but I venture to say that when the day comes and it’s time to shave the head, I won’t be Demi Moore in G.I. Jane.  I won’t look like her and I certainly won’t be brave like her.  Of course, she IS an actress and she did get paid a lot of money to watch those long gorgeous locks fall to the floor.  Check out Melissa Etheridge perform the tribute to Janis Joplin at the Grammy’s in 2005 http://www.youtube.com/watch?v=hXlaeVDd_Tg  . With her head completely bald, she belted out  ” Piece of My Heart” just days after her last chemo treatment.  I’ve watched that video at least ten times before my diagnosis and ten times after.  She’s unbelievable. Amazing. Inspiring.  With a nicely shaped head.  But I’m not her.  Let me tell you who I am.
I’m the one who, for years, went to get my hair cut and said I want the ends “barely nipped, because I want to let it grow”.  I would see an inch of black hair on the floor and say, “Really? Is that just nipping the ends?”  Lauren would try to talk me into trying something different and I said truthfully, “I see many different people all week long.  My hair is the one thing I get at least one complement on each day. So, if I ruin it, it’s all I’ve got. Yes. I said it. Out loud. It was during a moment of weakness.
Last year, when we were planning Lauren and Jesse’s wedding, I was contemplating a new look.  I went to Cha Cha’s in Lexington, and the owner Jason could see my type coming a mile away.  I wasn’t going to be the fun, adventurous type customer who would say, “I trust you. Be creative. Do something crazy!”  He could tell right away that I’d be counting millimeters on the floor.  When I mentioned some subtle highlights to add some dimension and give me a softer look, he suggested that we not do anything drastic and simply add a few more highlights each visit.  So, I left that day with a few caramel highlights that could only be seen in the sunlight with my head tilted to the southwest.  It was perfect.  With each visit, I’ve gotten more highlights and love the new color and style.  I even mentioned that to Jeff not long before D-day. He’s always telling me that women are never happy with their hair. I proved him wrong that day.  He was surprised and laughed out loud.  I obviously don’t pay myself many complements.
If she loves you...heck, even likes you, my sister Gail is more loyal than a golden retriever.  She would adore that comparison because it’s a fact: No one on the planet loves animals more than my sister.    She told me just weeks after my diagnosis that she was going to shave her head when I lost my hair.  Gulp.  I didn’t know whether to laugh, cry, or punch her (We’re sisters. We do that.).   I’m incredibly touched, but I begged her not to do it.  She has pretty hair.  If I thought for one second that she would regret it, it would upset me. Her misery wouldn’t make me happy.  But I am so grateful to have someone in my life who would make that sacrifice.


After the trip to Stuarto’s (the oil shoppe in my Serendipity blog), it was time to meet Liz and the kids at the Hair Institute.  It wasn’t just a wig store, but THE wig store.  It was the Patron of Tequila, the Armani of suits, the Ferrari of cars…only there were no wigs in this showroom.  “Eric” would have to bring them out one at a time.  Not quite what I envisioned.  Even Jordan showed up for some fun.   I just want something that looks just like my hair now, doesn’t look like a wig, and is comfortable.  Eric said that if I want hair that was my length (13 inches), I would have to choose a human hair wig.  He brought out one that appeared to be close to my hair color.  It was all one length (very long) with no bangs. Eric said that they have stylists who will cut and style it exactly the way I want it.  I dreaded putting the wig on my head. I just knew it was going to feel like all of the scratchy Halloween costume wigs I’d worn in the past.  “The wig weighs less than an ounce,” Eric said. That’s less than an envelope!  Ok. Let’s take this for a test drive.  I put my hair back but left my bangs out so that I could see how closely the color matched.  It was hard tell where the wig ended and MY hair began!  It was soft, lightweight…..and pleasantly surprising.  The nurses, doctors, and Breast Cancer Navigators from St. Joe and Central Baptist say that most insurance companies pay for wigs, or at least a portion of it. We’ll see. 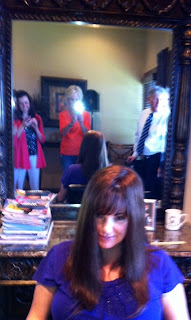 That's Liz and Lauren in the mirror, along with the consultant Eric. He just happens to look like Jeff in this photo. 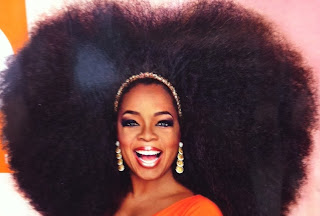