After another eventful day in Lexington, we drove to Liz and Barry’s to crash for the night.  I walk in the dark kitchen and see a gift bag, cards, a cupcake with a lit candle, and a musical tiara.  Just what every princess needs for her upcoming 49th birthday!  Liz noticed my purse wouldn’t hold all my stuff, so she bought me a bigger one. She remembered when I commented on the perfect color of her Clinique Chubby Stick lipstick, so she made sure I had one too! 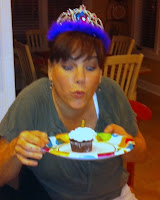 Jordan just got a new job waiting tables at Saul Good.  Liz asked him what he had to wear for his uniform.  The next thing I knew, she had bought him some new pants from Gap!  The woman is the most generous soul on the planet.  She says she loves me and wants me to focus on getting well, not on the small stuff.  I don’t know how I will ever repay her.

While Jeff was at work and I wasn’t on pain medications (I was feeling pretty good, relatively speaking), I decided to go to the grocery and stock up for the weekend.  I couldn’t imagine, after all he has had to do recently, asking him to shop for a cartful of groceries on his way home from work.  Lauren, Jordan, Jesse, and Oriana were planning on coming to Prestonsburg to celebrate my birthday, and we were out of everything.  I went to the local Food City, just three miles from home, shopped for nearly two hours, loaded about 40 bags into my tiny Mini Cooper (with the incredibly heavy door I had to push open with my foot), and drove to the post office.  For those of you who live in suburbia, and have never had to drive to the local post office to retrieve or drop off your mail, you must know this:  it’s a huge inconvenience… and a blessing.  Seeing Anita and Vanessa’s smiling friendly faces each morning brightens everyone’s day.  Thanks to Facebook and small town chatter, they knew about my breast cancer diagnosis before my family doctor got the news.  No joke.  Vanessa recommended a book for me (which I purchased and have read a few chapters) and both ladies say they pray for me every day.  Sigh.  It’s funny how an illness has a way of forcing us to slow down and pay attention to the important stuff like love and prayers and people.  Walking like Tim Conway as the old man on The Carol Burnett Show, I shuffle back to my Cooper with several days worth of mail.  I sift out the eight or nine envelopes (bills) from Central Baptist, Humana, or St. Joseph Hospital, and a letter from my insurance company denying coverage for the $4040 BRCA gene test. I toss them all in the passenger seat and open a get well card from The Kentucky Lottery’s Madisonville regional office.  There were a dozen messages of love and get well wishes.  As I read each one, I imagined each of their faces and it made me cry.  I opened up the next card to find it was a birthday card signed by the same group, and then a card from my buddy Larry at the corporate office, who always makes me laugh.  My cousin Karen, an oncology nurse in Asheville, told one of her cancer patients about me. She sent me a card with kind and encouraging words written on BOTH sides of the card. Along with it, she enclosed her phone number so that I could call if I needed a friend.  OMG! I consider myself a pretty thoughtful person, but I’m beginning to realize I have a LONG way to go!   Missy, a childhood friend, sent a card with a heartfelt message.  She said she struggled with words, but they were perfect all the same. Jim, a lottery customer and friend, wished me a happy birthday.  Sylvia sent me a birthday card with an Orange Leaf gift card enclosed.  I immediately started thinking about Brownie Batter froyo covered with chopped bananas.  Mmmm.  I wondered how she knew, and then I remembered my recent blog post before my surgery.  I’m so lucky to be surrounded by people who not only love me, but remember what I like!   I opened a box from my former childhood next door neighbor, Bev.  Although I hadn’t seen her since 1979, she sent me a bonsai tree!  She knows how much I love gardening!  There was also a package from Sylvia.  In it was a card saying that I had mentioned chocolate truffles in my blog (I actually dreamed about them the night before my surgery- who else besides me dreams about food?).  Sitting in my car alone, I squealed out loud and looked for the pocketknife on my key chain so I could open that box NOW!  While chomping on a gooey chocolate ganache truffle, I opened a box from a co-worker named Sherry, who has officially appointed herself my cancer survivor cheerleader in Louisville.  She shipped me a funny book called Look Before You Leap- A Frog’s-Eye View of Life’s Greatest Lessons by Kermit the Frog.  She included a stuffed breast cancer teddy bear and a cheerleading pom-pom so I won’t forget that I have her… a LIVER cancer survivor… cheering me on throughout my treatment.  This was all from a co-worker whom I have spoken to only a few times…ever! Wow. What an amazing woman. 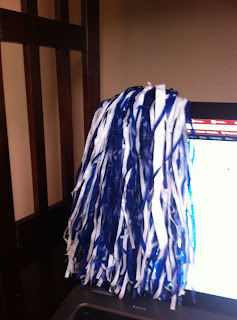 I have a cheerleader!

I opened so many more birthday cards from family, co-workers, and friends-old and new.  I was feeling the love.  I knew I’d better drive home before I saw someone I knew walk past my car window.  I already had a growing pile of wadded up Kleenexes in my floorboard, and I didn’t have the energy to explain my tears.

In my family, both now and throughout my childhood, birthdays have always been a cause for celebration.   We can all count on lots of food, presents, and games to entertain us throughout the weekend.  Lauren and Jesse gave me all kinds of organic bath products and a blanket printed with some recent “special” family photos. 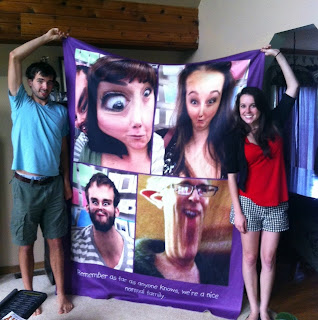 Jeff gave me a keyboard for my new iPad and Oriana made me some miniature ceramic birds for my Victorian dollhouse I’ll buy some day.  Jordan created a funny card and enclosed a print of the two of us together.  I was touched that the photo meant as much to him as it did to me. 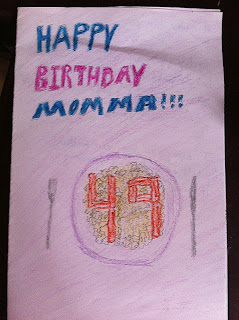 For the Breaking Bad fans out there...

Several times throughout the weekend, I found myself wondering if our birthday celebrations and family traditions, in all their ridiculous detail and splendor, would continue without me.  I had no doubt that they would.  It made me happy and sad at the same time.  I looked at Lauren, my compassionate, sensitive mini-me, who has grown into such a responsible young woman.  I marvel at her sign language skills and wonder what it would be like to spend a day with her at work.  Beside her, sat her new husband, Jesse.  I smile knowing that my son-in-law is a computer programming genius, will graduate in December, and soon be the next Steve Jobs.  Before long, they’ll begin their own family and I say a silent prayer that I’ll see their children’s children someday. 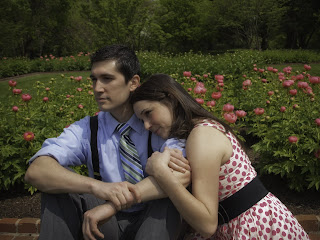 I felt like I was watching a TV show of my life, only in slow motion.   We’re all sitting at the dinner table and laughing hysterically at Jordan.  He’s truly one of the funniest people I’ve ever met.  Lauren and I agreed that with his flair for accents and ability to impersonate people and their facial expressions, the guy could be a regular on Saturday Night Live.  Thankfully, he doesn’t spend all his spare time in comedy clubs working amateur hour.  His goal is to read 75 books this year (increased from last year’s 50), many of them classic literature.  He’s majoring in mechanical engineering and wants to make underwater robots.  I’m sure there’s a more technical name for it, but it eludes me now.  I look at his beautiful girlfriend Oriana, with her jet black ringlets framing her flawless complexion.  Jordan’s sense of adventure and humor combined with her creative artistic skills and enthusiasm means that they’re never bored.   I say another silent prayer that Oriana will always be a
part of our family.

And then there’s my Jeff.  If there’s one thing in my life I’ve done right, it’s to have married that shy boy from eastern Kentucky.  I said “boy”, but having just turned 22 when we met, compared to any other guy I knew, he was light years older in maturity and wisdom.  An “old soul”, some would say.  But he had to be.  His father died when Jeff was 12 and his mother would pass away just three months after we met.  Since then, he’s buried all three of his siblings: Gary, Phil, and Steve.   He deserves a break. Unfortunately, he’s under more stress than ever.   One of his two secretaries recently quit and he’s juggling mounds of paperwork and driving me to doctor appointments.   Thank God he finished his novel around my “D-day”.    You can see it at Amazon.
They say there are no accidents.
I can’t help but remember that broiling hot summer day in 1986, when I wore a long sleeved wedding gown embellished with pounds of pearls and beads (ok. It just felt like it).  Being the bossy one, I wanted us to say our vows and not repeat them after the minister.  I thought it would be more special.  Why I thought that I have no idea.  I still remember those vows: “I, Jeff, take you Ann,  to be my wife, to have and to hold from this day forward, for better or for worse, for richer, for poorer, in sickness and in health, to love and to cherish; from this day forward until death do us part.”  Sickness and health?  Never in our wildest dreams could we have imagined what would be happening 9935 days later.  He would be dressing me while trying not to dislodge a drainage tube.  For those of you wondering if I actually calculated the days on my calculater….Nope. There’s an app for that.

Drainage tube?  I’m sure you’re wondering that you might have missed something.  No.  Just a teaser ‘cause I want to leave you hanging.  It’s the writer in me, I suppose.  It’s just a little way to celebrate my two month “cancerversary”.  More soon.  It’s tough to compose a coherent sentence while medicated…..
Posted by Unknown at 2:06 PM