“Stop worrying about yourself and do something nice for someone else,” my mom used to say when I was young and would pout and sulk over my seemingly monumental troubles.  She’d bake a jam cake or we would make some cookies and visit someone who would make us realize we didn’t have it so bad.   We’d visit retirement homes, Eastern State Hospital, Shriner’s Hospital, or families in roach infested apartments and bring toys or food.  I always felt better afterward, but I thought it was because I wasn’t old, didn’t have burns all over my body, didn’t have a mental illness, or cockroaches in my house.
Until I had children of my own, I thought mom sent us to those places so we’d realize how fortunate we really were.  I couldn’t have been more wrong.  She wanted to show my sister Gail and me how giving to others will bring US happiness.
This week has been a tough one for many reasons.  Although my cough is better and my lungs are now clear, my radiation burns are keeping me up at night.   I can use aloe and hydrocortisone cream, but the relief doesn’t last long.   It’s safe to say that I don’t deal well with burns.   I also have some stabbing pains where my tumor was and Dr. Matar (rhymes with tater), the radiation oncologist, says that it’s a normal side effect of radiation.  The pains hit me at the most inopportune moments.  Usually, I’m in a waiting room surrounded by people when the stabbing pain hits me.  It catches me off guard and, as a reflex, I usually gasp and clench my breast.  Thank goodness, the pains leave as quickly as they come.  The purple golf ball is now shriveling and I’m beginning to see the final results of the damage from my lumpectomy.  Due to the change in tissue, plastic surgeons won’t perform reconstructive surgery until one year after radiation is complete. That tells me this hole in my boob will get bigger.  Earlier, I had mentioned having a bi-lateral mastectomy and reconstructive surgery after the one year wait was over.  According to my oncologist, the chances of recurrence will not change if I remove my breasts.  Most of the time, when breast cancer recurs, it comes back in other organs. Gulp.   Dr. Moss, Dr. Matar, and Dr. AJ seem to think that the lumpectomy, chemo, and radiation are enough to give me an 80% chance of survival.  After chewing on that statistic for a few days, I got some scary news from my friend Lesa.  She’s my new friend who brought Gigi’s cupcakes to my 1st and last chemo treatments.  She had a mastectomy, chemo, radiation and finished all of her treatments in March 2012.  We have the same doctors.  Days ago, she felt tired and noticed a swollen lymph node.  She had a PET scan and found out the cancer has spread.  I’ve been devastated over this news.  This sweet woman, who radiates joy, happiness, and a positive attitude, has to begin another round of chemo treatment soon.  She’s now searching for a miracle in Houston, where they have the #1 cancer research hospital in the country.  Please, friends and relatives, pray for her.

It was time to make myself feel better.  I thought…..What makes me smile?  I remembered Mr. Sparkle Man, the happiest man I know. He wears a sandwich board advertising Mr. Sparkle Car Wash and stands on the corner of Richmond Rd. and New Circle Rd. in Lexington.  He waves at passersby, and smiles and points when we honk and wave, as if to say, “I remember you!” 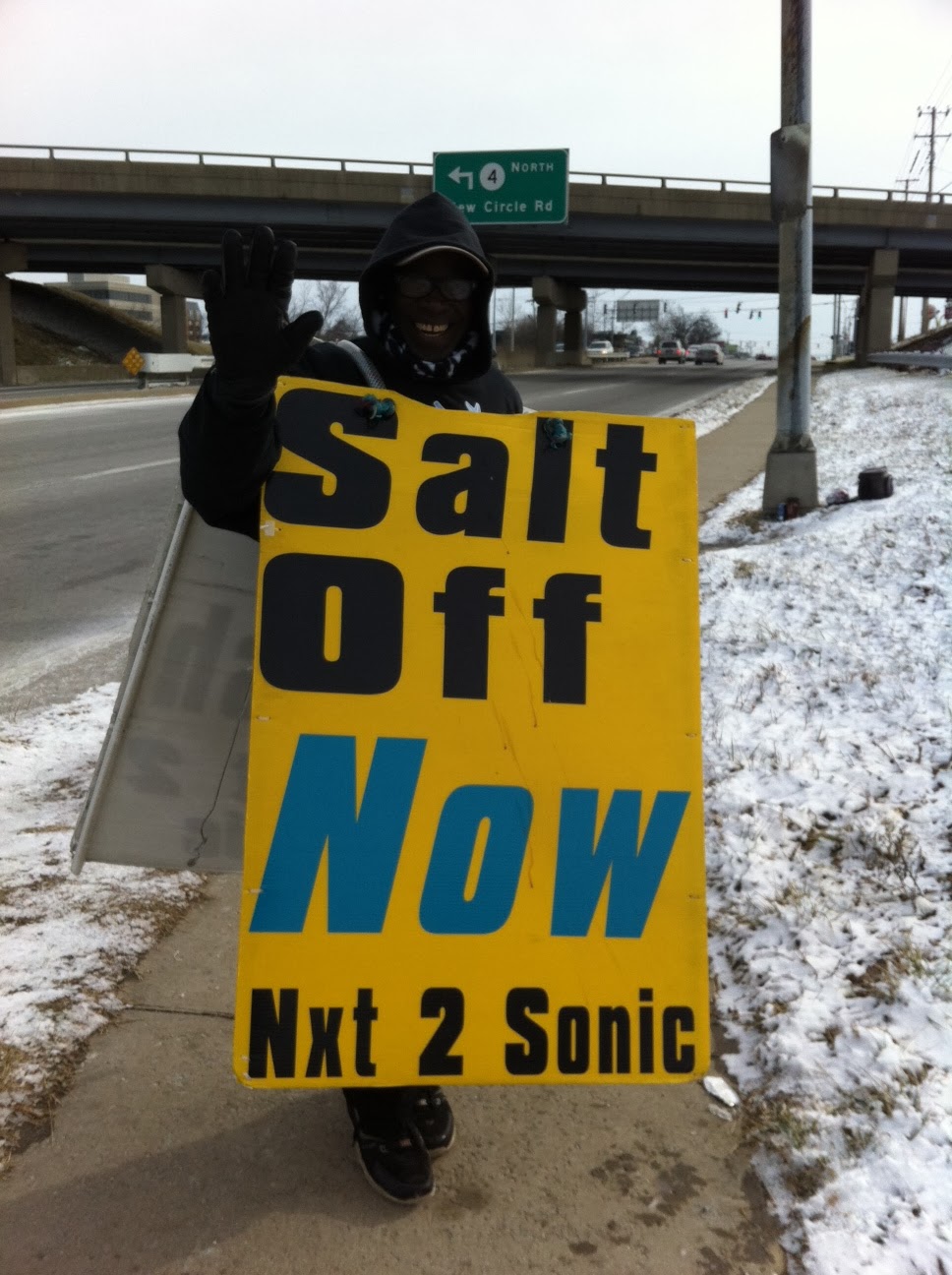 It was Tuesday, and freezing.  The temperature gauge in the car said it was 19 degrees outside and the wind chill factor made it feel even colder.  I wondered how this man could be so joyful in this weather and decided I wanted to meet him.  I turned around and drove to Starbucks and ordered a large hot chocolate with whipped cream.  I parked near the Shell station and walked on the curb toward “Mr. Sparkle”, watching him wave, smile, and point as the drivers honked their horns.  When I approached him, he smiled and said hello.  I said, “Hi! My name is Ann and I just wanted to thank you for always making me smile.  I brought you some hot chocolate because I thought you must be freezing out here.”  He laughed and said, “Thank you, Miss Ann.  My name is Derald.  Are you from around here?”  I told him that I was originally but moved to eastern Kentucky almost twenty years ago and that I've been in town for chemo and radiation.  He said he was sorry to hear that and that he would pray for me.  Wanting to lighten up the conversation, I asked him where he was from.  “Louisiana.” I told him I loved New Orleans and he said he misses the food.  He worked at a hotel there, he said.

I asked if I could get a picture of him.  He said, “Sure!!!”  I put my arm around him and gave my best attempt of a selfie.  All the while, people were honking and we both waved.  He laughed every time I waved too. 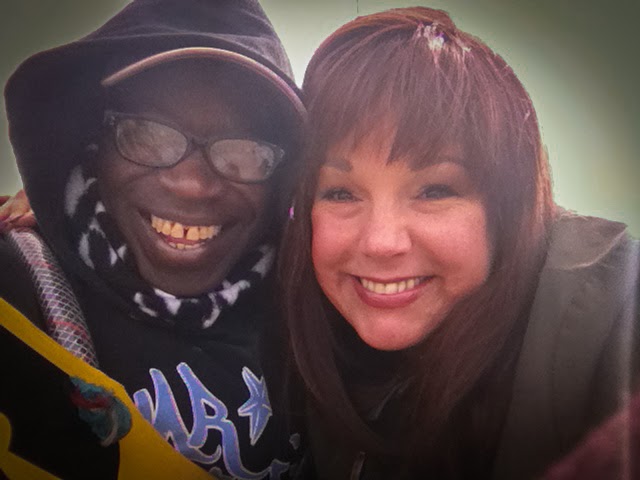 
I later found out that Derald is somewhat of a celebrity and had made the local news.  He was homeless and jobless when the owner of Mr. Sparkle took a chance on him.  Someone must have also taught Derald that giving will make him happy.   God knows he's made the day of many locals!
Posted by Unknown at 5:58 PM